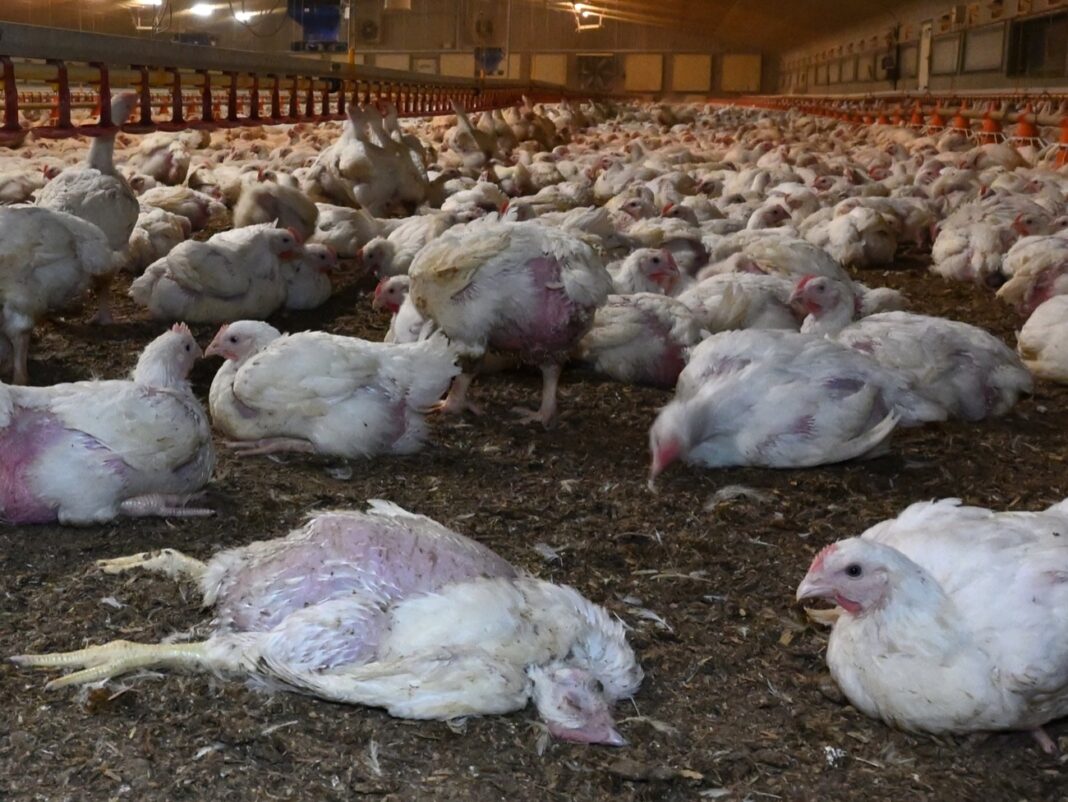 Charity argues that the standard industry use of breeds of chicken who grow unnaturally large, unnaturally fast is unlawful

An animal protection charity has filed a Judicial Review against Defra’s allowance of the widespread use of fast growing breeds of chicken, known as Frankenchicken, contrary to legislation that bans the keeping of animals if their breeding causes ‘detriment to their health and welfare’.

The Humane League UK argues that the standard industry use of breeds of chicken who grow unnaturally large, unnaturally fast is unlawful, and challenges Defra’s current position allowing the use of these extreme breeds.

Pru Elliott, Senior Campaigner at The Humane League UK, said: “There’s an assumption that because intensively breeding chickens to grow unnaturally fast is standard practice, it is therefore legal.

“But looking at the legislation it’s crystal clear that the law is being flouted in standard chicken production.”

Broiler chickens have been genetically selected over decades to prioritise for fast growth, to produce as much meat in the shortest possible time.

The case asks the court to determine that Defra’s policy to permit the current standard of farming fast-growing ‘FrankenChickens’ in the country is in breach of the Welfare of Farmed Animals (England) Regulations 2007.

The rule states: ‘Animals may only be kept for farming purposes if it can reasonably be expected, on the basis of their genotype or phenotype, that they can be kept without any detrimental effect on their health or welfare.’

Elliott continued: “We believe Defra has an unlawful policy in permitting the use of these breeds and should instead be stipulating that they cannot be used. We also believe they have an unlawful monitoring system in place that fails to detect the scale of welfare issues associated with fast growing chickens.”

Broiler chickens have been genetically selected over decades to prioritise for fast growth, to produce as much meat in the shortest possible time. As a result, they can suffer from a wide range of health and welfare issues.

Last year an investigation by The Humane League UK revealed that the muscle disease white striping, caused by fast growth, was present in over 8 in 10 standard packets of chicken on supermarket shelves.

The challenge comes after the RSPCA published a scientific report in 2020 comparing the welfare of three different breeds of fast growing chicken. It showed that the fast growing breeds have poorer health and welfare than a slower growing breed.

Despite the clear scientific consensus and the findings from numerous undercover investigations on broiler farms using these breeds, Defra’s position is that fast growing breeds can be kept without detriment to their health or welfare, as stated in its responses to The Humane League UK’s pre-action correspondence.

Edie Bowles, Solicitor at Advocates for Animals and representing The Humane League UK in this case, said: “The law is clear that farmed animals can only be kept if the breed used will not experience detriment to their health or welfare. The science clearly shows that fast growing broilers cannot be kept without such detriment. It is therefore evident that keeping fast growing broilers is unlawful.”

The case also challenges the ‘trigger system,’ Defra’s monitoring system aimed at detecting welfare issues associated with commercial broilers. The trigger system requires vets at abattoirs to report welfare issues, but only if they occur above a given threshold as set out in Defra’s Code of Practice. The Humane League UK believes the threshold set by Defra is too high.

The high threshold results in countless welfare issues not being reported and dealt with. This is contrary to the 2007 farm animal welfare regulations which state: ‘If the mortality rate of the chickens or the results of the post-mortem inspection are consistent with poor animal welfare conditions, the official veterinarian must communicate the data to the keeper of those chickens and to the Secretary of State without delay.’

Charities have been campaigning for food companies to commit to ending the use of fast-growing FrankenChickens by asking them to sign up to the Better Chicken Commitment (BCC), which demands slower growing breeds, more space, natural light and enrichment, less painful slaughter methods and third-party auditing.

KFC, Nando’s, Greggs, Marks and Spencer and Waitrose are among the 250+ companies in the UK and EU to have committed to the BCC, but supermarkets including Morrisons, Asda, Sainsbury’s and Lidl are refusing.

FOOD FRAUD: 37% say takeaways are the least trusted type of...

Is the jab safe for children? Top paediatrician answers your questions...