“It has been eight years since the Syrian Security Services threatened to cut off my hand and I do not doubt that those speaking out against Assad, even after the defeat of IS, will face the same threats.”

Eight years ago, I fled the Assad regime and moved to the UK with my son, a decision no one should have to make but many are forced to. I had to say goodbye to my home, friends and family, to rebuild my life away from violence, terror, and tyranny.

The Syrian conflict has lasted longer than World War II, now a decade long, but despite the ongoing war, I continue to pray and hope my home country finds peace. The only way I truly believe this can be achieved is through democracy.

Political rights and civil liberties have been compromised in Syria by one of the world’s most oppressive regimes and terrorist groups. 11 million people are crying out for humanitarian assistance and more than half of the population remains displaced. This is abhorrent.

The Baath Party, or should I say family, has governed Syria without interruption since the late 1960s. The government is dominant.

There has been no presidential election since 2014, so for the past seven years, Syrians have been subject to Assad’s rule without any democratic rights or say.

“I was a journalist in Damascus right up until the war began when the political climate became volatile, unstable and corrupt.”

After living in a country torn apart by war, it has been a relief to live somewhere peaceful. Despite not knowing what the future held for us, I was comforted to have reached somewhere safe.

I have witnessed in the UK, and before I left Syria, that democracy delivers progress, stability, and peace. It is key to society’s welfare, protection, and human rights. It provides a voice to all corners of society from disadvantaged minorities to underrepresented communities. The Assad regime suppresses freedom of speech and prohibits any opposing parties from challenging it. There is utter corruption.

We have seen the Syrian government use chemical weapons against opposing rebels and disproportionate levels of aerial bombardment and shelling, despite the cost of thousands of civilian lives. The human rights abuses are immense and Assad deserves punishment for his war crimes.

Framed as the ‘enemy’

It has been eight years since the Syrian Security Services threatened to cut off my hand and I do not doubt that those speaking out against Assad, even after the defeat of IS, will face the same threats. Many had hoped Syria could begin to return to what it once was, but after my experiences, I knew this would not be true.

I was a journalist in Damascus right up until the war began when the political climate became volatile, unstable and corrupt. I thought it was my personal duty to research and write about the unfolding violence between Syrian civilians and the Assad regime.

I was often framed as an enemy to Assad as I exposed his increasingly tyrannical and vindictive reaction to unrest. Once, I was interviewed by a Western journalist about my work and following the publication of this piece, I was detained for hours by the Syrian Security Services.

The government has operated for years with minimal transparency and no accountability for its actions. The conditions for civilians have worsened. The military is loyal to the regime and populations are exploited for the means of the government. Society groups independent from the regime and media outlets are crushed, unable to shed light on the tyranny.

Tomorrow would not be soon enough for the Assad regime to be defeated but the people of Syria will still face hardship long after his reign. The difficulty ahead is building this democracy after years of oppression and ten years of bloodshed.

What can the international community do?

While it quickly condemned the Syrian government during the start of the civil war, a decade on the world is facing new threats and challenges as Syria continues to suffer. Coronavirus has impacted us all, but Syrians, among many other war-torn countries have been hit hardest. Prospects for a peaceful solution are limited without international backing and support. However, there are conflicting views about how to handle the Syrian crisis but one thing is for sure, Russian involvement is not the solution to a better or peaceful Syria.

There are those that propagate the Damascus Declaration in Syria today, which calls for a truly democratic country under law, and discusses the role of Islam and the situation of Syria’s Kurdish population as equal citizens. I admire the courage of those who wrote it and suffered time in prison for exercising their rights. I believe their devotion provides Syrians with the guidelines and foundations to follow and provides hope that democracy can one day be built.

Assad’s international allies have strengthened his reign and his sights remain set on Idlib, a beautiful province held by rebels, inundated with military, and fighting. Even as recently as three days ago there were reports of at least six civilians injured in a regime attack.

I had hoped peace would have been achieved a long time ago, but I was evidently being too optimistic. Peace will only come to my home country without violence. The world must speak up about the human rights violations Syrians have been forced to endure for too long and there must be a democratic election for peace to be achieved.

The International Community needs to continue to condemn Assad openly, diminishing his power and holding him accountable for his war crimes and unspeakable human rights violations. This I know will help achieve peace to the country I still love and will always be home.

Since escaping Syria, Bahia dedicates her time to helping refugees like herself, who have made their home in the UK. For more information about Bahia Mardini, visit her twitter page: @BahiaAlMardini1 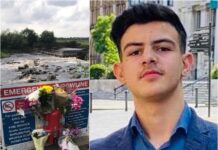 Boy died a hero: 15-year-old drowned after saving his brother from river