As the UK continues to fall in love with food delicacies from around the world, one Syrian refugee has made it her goal to bring halloumi cheese to the tables of Britain and guess what… she’s winning.

Arriving in the UK just two years ago, Razan Alsous – a determind mum-of-three, set up her own Kirklees-based cheese factory.

The 31-year-old has a background in microbiology and upon moving to Huddersfield, decided to try her hand at running her own business with a Syrian favourite at the heart of operations.

“Halloumi is a product which is very popular back in Syria and we eat it every morning for breakfast,” she said.

“After conducting some research on the internet, I found that Britain was actually the second biggest consumer of halloumi cheese in the whole of Europe, only Sweden was ahead.

“The problem I found was that quality halloumi cheese was not available in all seasons in the UK market yet there is a demand for the product all year round.

“It is becoming a trendy food here and so I decided to try and set up a halloumi cheese business which sourced all ingredients from local suppliers.”

Despite only starting production earlier this year, Razan’s halloumi cheese has already proven to be a huge hit with the public and critics alike, as it was awarded a prestigious food award last month.

At the BBC Good Food Show in London, more than 2,700 products were nominated for the top honour, and it was Razan’s locally-produced cheeses that were awarded a Bronze accolade in the 2014 World Cheese Awards.

Explaining how she always had faith in the local produce, the dedicated mum who is now settled in Linthwaite with her family said: “Before we went down to the ceremony, I was confident in our cheese because we knew that it was a really good product.

“It wasn’t until we got there and saw all these different cheeses from around the world that I began to get a bit nervous. There were really big businesses who had huge pieces of cheese with them and we just had our little box of halloumi.

“When I heard that we won the award, it was great and the whole experience of the ceremony confirmed our cheese was one of the best.”

Razan added that the success of the business would not have been possible without the support of her husband, Raghid Sandouq, yet there wouldn’t even be a Yorkshire Dama Cheese company, had no backing been made possible by local bodies.

With little capital behind her back in 2012, Razan initially approached the job centre for advice about setting up her own business and was soon put in touch with the West Yorkshire Enterprise Agency (WYEA).

After drawing up business plans and conducting research, she was placed on the New Enterprise Allowance – a Government scheme which helps those out of work to start their own business.

With the support of a business mentor, she produced a business plan and within 12 months of extensive research, sampling and dozens of recipes, the business was finally born.

“My motto is that nothing is impossible, especially when there are people out there who can help you,” she said.

“The financial help from the New Enterprise Allowance is small in value but big in opportunity – it gave me the ability to buy the equipment, start my business and turn my dream into reality.”

EYEWITNESS: “My hope is simple. A peaceful Syria.” 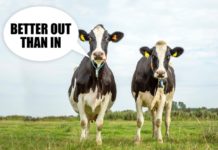 Burping and farting cows blamed for damaging the environment

Track of the year!

Burping and farting cows blamed for damaging the environment