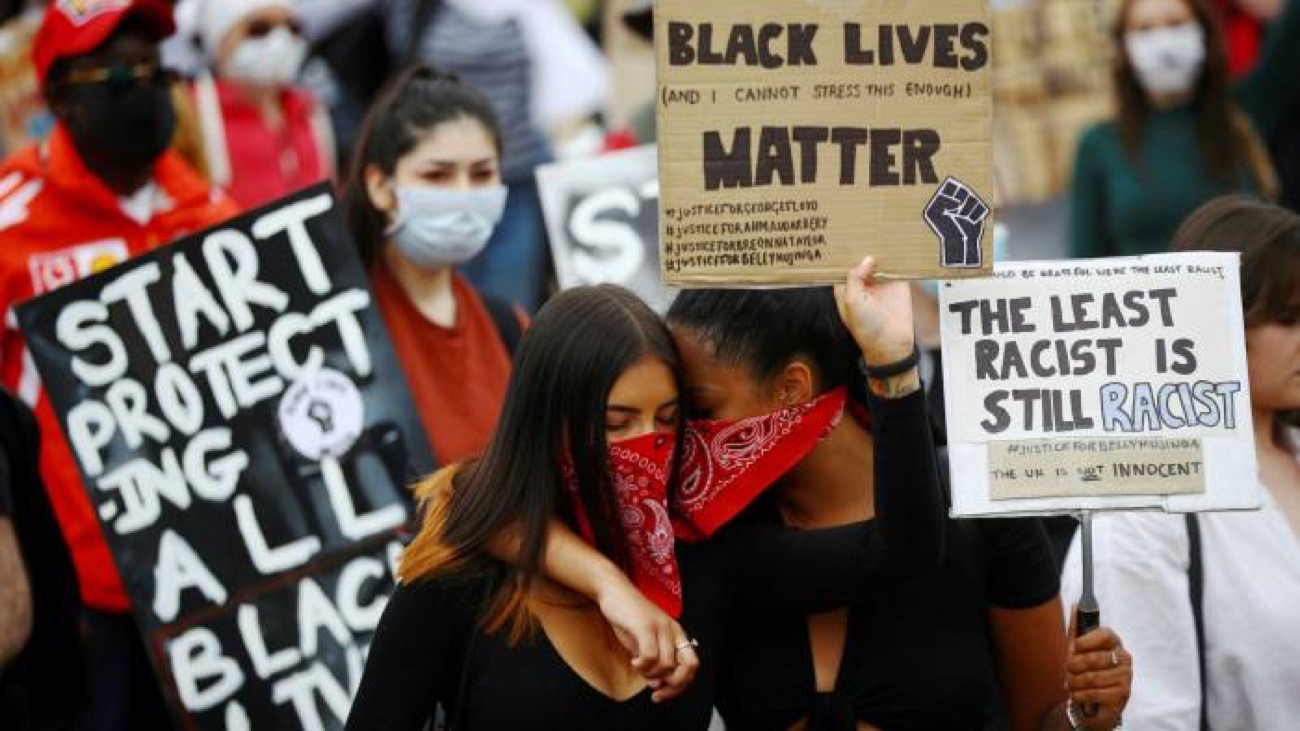 Against a backdrop where the world is battling a disease that can leave people unable to breathe, the brutal murder of George Floyd has galvanised the Black Lives Matter movement – forcing many countries to turn their gaze to their own legacy of systemic racism.

Despite the threat of a pandemic, millions have been taking to the streets – from the US to the UK – to demand change in a world where a police officer felt safe enough to kneel on the neck of a black man for nearly nine minutes while being filmed on camera. There is after all safety in numbers.

Progress is overdue, and at a time when the world is at a standstill, feels even more potent.

In Britain, a country once described by George Orwell as a rich family that maintains silence about the sources of its wealth, statues of slave traders are being pulled down by protestors. But change – within social and political institutions – is only just starting. We still have a very long way to go.

Prime Minister Boris Johnson, who wrote a column in 2002 urging ‘the best fate for Africa’ lies in the restoration of the old colonial powers, has recently stepped forward to say that he does not believe the UK is a racist country. Globally, the UK is marketed as a welcoming, diverse platform – however, this is far from the reality for many black people and minority groups.

It has been 27 years since Stephen Lawrence was murdered in a racist attack, leading to an inquiry that found the police guilty of “institutional racism”. It is a charge that stands true to date. Black and brown people are disproportionately imprisoned in the UK, just like in the US. They are disproportionately dying in custody (since 1969, only one police officer has been convicted in such cases).

The colour of your skin dictates how you are treated by the criminal justice system, a David Cameron-commissioned report by David Lammy found in 2017.

But racial discrimination is far more widespread. It exists in the UK’s most prized institutions, from healthcare to education. Black, Asian and minority-ethnic (BAME) communities continue to face poorer outcomes in many areas of British life.

Government reports show black Caribbean children are nearly three times more likely to be permanently excluded, for example – negative stereotypes play a part in this. Meanwhile, a lack of understanding about cultural traits mean black students are disproportionately targeted by “draconian” zero-tolerance behaviour, facilitated in part by a lack of black representation in both teaching workforces and British curriculums.

Covert racism is a lived reality for many children, just as it is for the majority of BME teachers.

Racial bullying is also rife in schools. Refugee children in particular continue to face a ‘toxic environment’ of racial discrimination, another ‘hostile environment’ legacy. Such is the case of Shukri Yahya Abdi, a 12-year-old refugee from Somalia who was being severely bullied at her school prior to her tragic death last year, as recently brought to light by the Black Lives Matter Movement.

Where racial discrimination does not cut lives short, it continues as a lifelong affliction.

But those from ethnic minorities have already stumbled before landing a foot on the career ladder. An Oxford University study found that BAME applicants send on average 80% more applications to elicit a positive response from an employer – at levels unchanged since the 1960s. It is even higher for those of Nigerian and north African origin. Over in the US, a Harvard study found job candidates were more likely to succeed when they “whitened” their name.

Within immigration law, the Windrush scandal instigated by ‘hostile environment’ policies has laid bare decades of racism. It has seen thousands of black Britons and their families systematically targeted: wrongly deported (11 of whom have died) or imprisoned, denied treatment, evicted –despite having a legal right of residence in the UK.

Many have since been granted official British citizenship; however, only a fraction of the compensation promised has been made so far – and the measures that led to the Windrush scandal remain a central part of government policy.

Earlier this year, a report found the Home Office guilty of “institutional ignorance” towards race – to speak in watered down tones – in its treatment of the Windrush generation. The Equality and Human Rights Commission has since announced a new investigation, aimed at ending “systemic and entrenched race inequalities” in the UK.

Similar disparities permeate the housing sector, healthcare, even the way black and brown people are portrayed in the media. Black and Asian households are more likely to live in “persistent” poverty, face unemployment, and avoid seeking the healthcare they need when ill or injured.

Race continues to guide who is deemed armed and dangerous. Black people are 40 times more likely to be stopped and search. But in other areas, they remain severely underrepresented: only 1.3% of the police workforce are black.

There are no BAME MPs in Scotland, Wales or Northern Ireland. Barely 3% of Britain’s most powerful people are from ethnic minorities.

Only recently Boris Johnson announced an inquiry into racial inequality in the UK, a new initiative to stamp out racism. How many reports does it take to effect change? Three years ago, Theresa May’s Race Disparity Audit pledged to tackle the same burning injustices. Evidence breeds inquiry on a loop, again systematically.

Three months ago, we woke up to a new world, it took a matter of weeks for us to adjust to new rules and a ‘new normal’. Change does not need time; it just needs to happen.