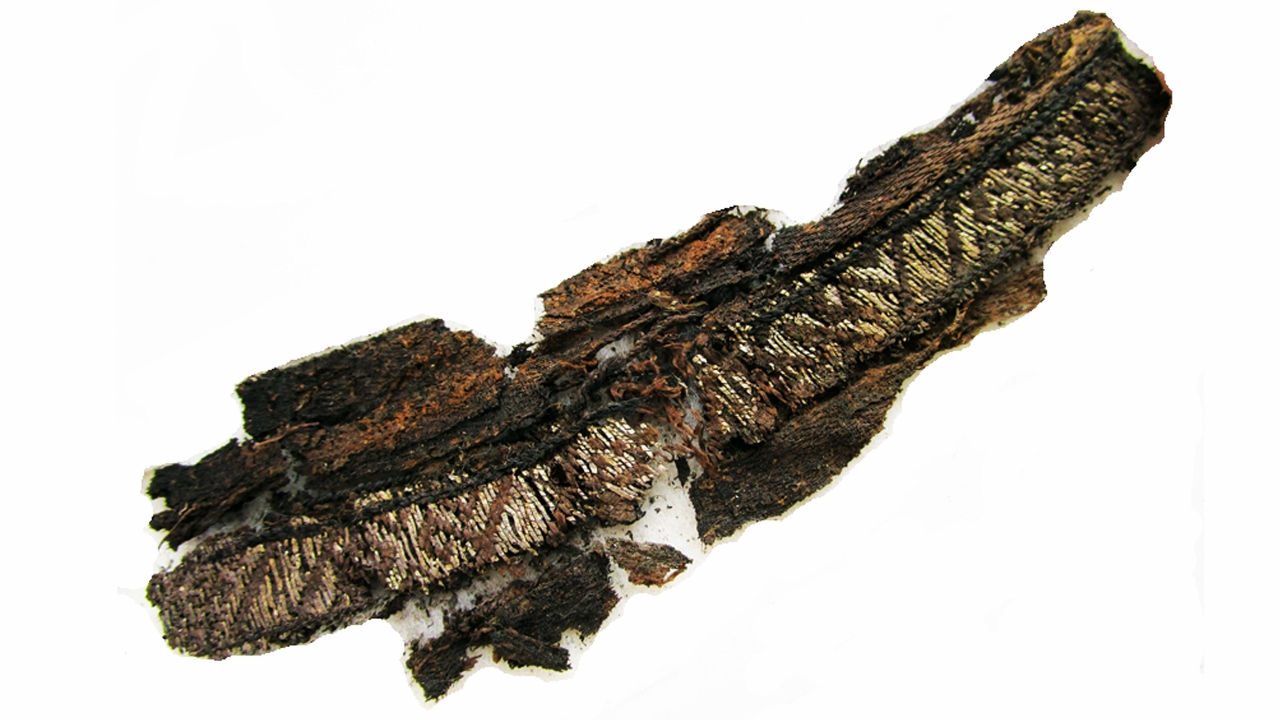 In 2008, a hoard of Viking Age Arab coins was uncovered in Sweden, and just two years ago, a ring found in a 9th century woman’s grave in Birka, Sweden, was revealed to have “To Allah” inscribed in Arabic

Ancient burial clothes thought to have been woven with typical Viking patterns have, after decades in storage, revealed a surprise: geometric Kufic script spelling out the words “Ali” and “Allah,” woven in silver thread onto silk.

Tharik is an award winning freelance broadcaster, journalist, travel writer, and photographer specialising in the Islamic stories of the West

Researchers in Sweden have found Arabic characters woven into burial costumes from Viking boat graves. The discovery raises new questions about the influence of Islam in Scandinavia.

They were kept in storage for more than 100 years, dismissed as typical examples of Viking Age funeral clothes.

It’s the first time historic artefacts mentioning “Ali” have been found in Scandinavia, marking this as an important archaeological discovery.

While at first glance this appears to be a surprising find, it doesn’t even seem that uncommon.

The script was found on at least ten silk clothing items out of 100 from 9th and 10th century boat graves around Gamla, Uppsala, as well as chamber graves in Viking Era sites such as Birka in Swedish Mälardalen.

The discovery was made when a team of researchers was trying to recreate the patterns on burial garments in storage for the then upcoming Viking Couture exhibit at Enköping Museum in Sweden.

“This is a very important discovery because it tells us we can’t view this historical period as ‘typically Nordic’,” Annika Larsson, a textile archaeologist at Uppsala University.

“It shows us that the Vikings were in close contact with other cultures, including with the Islamic world.”

Evidence for a connection between the Vikings and the Muslim world has been mounting for years now.

In 2008, a hoard of Viking Age Arab coins was uncovered in Sweden, and just two years ago, a ring found in a 9th century woman’s grave in Birka, Sweden, was revealed to have “To Allah” inscribed in Arabic.

Persian silk has also been found in a Viking longboat burial in Norway.

Initially, Larsson said, she couldn’t make sense of the designs, but then she remembered where she had seen something similar: on Moorish textiles from Spain.

The word “Ali” was relatively easy to decipher, but Allah was a little more tricky – because it had been mirrored, as seen in the image above.

The reason for this is unknown, but the most likely explanation is that the pattern had simply been copied incorrectly, as Amir De Martino of the Islamic College in London told the BBC.

Larsson believes that the presence of the names on the garments, always appearing together, indicate that the Vikings didn’t just trade goods with the Muslim world, but perhaps also burial customs and ideas.

“Presumably, Viking Age burial customs were influenced by Islam and the idea of an eternal life in Paradise after death,” she said in a statement.

“Grave goods such as beautiful clothing, finely sewn in exotic fabrics, hardly reflect the deceased’s everyday life, just as little as the formal attire of our era reflects our own daily lives. The rich material of grave goods should rather be seen as tangible expressions of underlying values.”

It’s not uncommon for graves to include objects and clothing as opulent and rich as the family could afford.

Further analysis will be required to learn more, and this is being carried out on the people who were buried with the garments to determine whether they was people from Persia or – much more likely – Vikings wearing Islamic textiles.

“The quality of Islamic silk textiles was such that they were highly coveted and used in Christian churches across Europe, and for vestments,” said dress and textile historian Hilary Davidson of the University of Sydney, who is researching transmisson of Islamic and Byzantine textiles in medieval Christian clothing.

“They were valued for their quality and beauty, not their religious context, which in any case became divorced through trading patterns. These silks were traded across Europe for centuries, and it is possible that the Norse Kufic patterns are imitating the pattern of Islamic textiles without knowing what the meaning is.

“They might be trade goods applied to Viking clothing as examples of high status, high quality silk and metal textiles.”

Now that the presence of the patterns is known, it may be easier in the future to identify it in other textiles, and perhaps even other artefacts.

Larsson’s finding are currently on display as part of the Viking Couture exhibition at Enköping Museum, which runs until 3rd February, 2018.