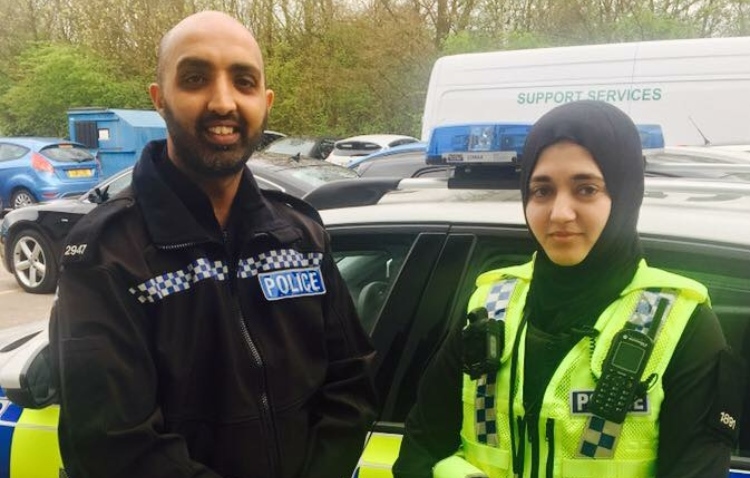 “A person’s role in society shouldn’t be seen as any different from anybody who doesn’t wear the hijab or the turban or the mosque hat.” PC Tayyaba Afzal

The Bradford District continues to set standards nationwide with it being the Curry Capital of Britain for the sixth year running, part of the epic Tour de Yorkshire (third instalment this weekend), UNESCO’s City of Film and home to some 200 South Asian restaurants, just to mention a mere handful of attributes.

And now, the City can add to its growing portfolio of sheer uniqueness, a female Muslim bobby patrolling the streets donning a hijab as part of her official attire. She’s involved with handling pub brawls, domestic incidents, dealing with dead bodies amongst some of her daily duties.

She became interested in a career with the police and attended a workshop led by PC Amjad Ditta a Positive Action Coordinator and Authorised Firearms Officer. Here she quizzed PC Ditta about if she would be accepted by WYP if she wore her headscarf and whether she’d be granted permissions to offer her prayers.

“I feel strongly about wearing the hijab as it’s an intrinsic part of my beliefs and values,” explains PC Afzal.

“PC Ditta answered all of my questions. He reassured me that WYP, due to the diverse work that it does and deep involvement with the communities, I’d be welcomed into the force.”

Following the application process, PC Afzal dedicated herself to completing each stage of the recruitment process. Finally, after finishing 12-weeks of intense training, she’s now a police officer serving the communities.

“Staying true to my identity has been really important for me, and what I have accomplished shows that no matter what background you’re from you can be part of the service and make a difference; this reflects on the police force in a very positive way.”

“I would say it’s a career like no other and a varied role. You can still practice your religion and beliefs and have a career. It gives you skills for life and is a very rewarding job.

“A person’s role in society shouldn’t be seen as any different from anybody who doesn’t wear the hijab or the turban or the mosque hat.

“It’s a shame that we live in an age where we are judged by the way we look, but that’s why I have joined to bust these myths and overcome the barriers others may perceive that exist.”

The Muslim communities have given PC Afzal much respect, and she says mostly when dealing with disruptions or tense situations, seeing a Muslim headscarf-wearing female demands respect.

“While arresting an individual recently they commented ‘It’s nice to see the police becoming diverse and accepting all other communities as well.’ I was totally taken aback, slightly amused and also pleasantly surprised – I took it as a huge compliment. It made my day.”

“There’s more to be done. However we are going in the right direction,” comments PC Ditta.

“The engagement that I and other officers including members of the community, mosque leaders, councillors and others have undertaken has had a significant impact in attracting a more diverse workforce.

“PC Afzal is a role model and an inspiration for other females who have always wanted to join but for reasons like “is the headscarf allowed” and “will we get time to pray” may have stopped them from applying.

“We as a force encourage all backgrounds to come and join our service.

“We need more individuals like PC Afzal and others to come and be part of the service.

“I would say it’s a job for life and a vocation. No one day is the same and each day brings its own challenges and rewards.