Home News From Midlands with love: How a tantrum-throwing student landed a place at... 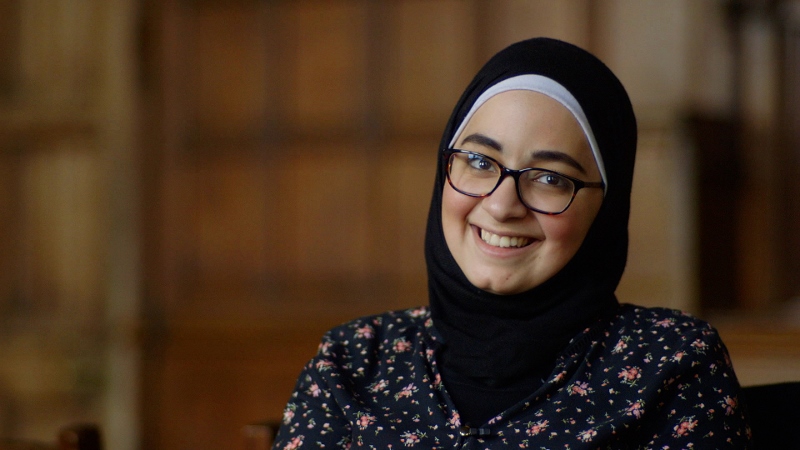 “I thought I was stupid, and my growing frustration meant that I began to misbehave.”

“She used to throw desks, knock over chairs, push past staff and not listen to them.”

When at just six-years-old Sara Harb moved to the Midlands from Jordan after her father secured a job in the NHS, she was literally lost in translation.

Arriving at her new primary school, Sara faced not only having to adjust to a new country with a completely different culture, she also couldn’t speak English, knew no one, and was hugely isolated.

Frustrated, she would throw tantrums, knock over school furniture and storm out of classes. That was until she developed an unshakeable bond with a teacher that propelled her to Oxford University.

Recalling her early experiences in the classroom Sara says: “Learning to speak a new language was incredibly difficult, so when I couldn’t understand what the teacher was saying I often cried.”

“I thought I was stupid, and my growing frustration meant that I began to misbehave. “Sometimes, when a teacher announced that we had a test, I would just get up and walk out of the classroom.”

“I was constantly being excluded from school.”Liam McGillicuddy, one of Sara’s teachers and Deputy Head at Quintin Kynaston Academy recalls Sara’s behaviour: “She used to throw desks, knock over chairs, push past staff and not listen to them.

“Once she saw red, it was pretty hard to get her to stop.

“As teachers it is vital to understand the barriers to learning that students have. We work together to share information and strategies that foster in students a love for learning.”

Liam and other teachers identified her self-doubt and lack of confidence as Sara’s biggest barrier, and weren’t prepared to give up on her.

Thanks to the passion and sustained commitment of her teachers, Sara’s behaviour eventually turned a corner.

Sara’s progress was so astonishing that in sixth form her teachers recommended her for the Teach First Futures mentoring programme.

The scheme assists young people who have the academic potential to go to university but may lack the confidence, knowledge or support to get there.

Fast forward to today and Sara is in her first year of studying history at the University of Oxford.

Liam admits it was an emotional moment when Sara’s teachers found out she’d made it to University: “She was crying. I cried a lot actually. It was the best moment of my career.”

“Teaching is an amazing career. You see your impact immediately, from day to day, but also over the longer term.  The difference that you make to the lives of others makes this job the greatest on earth.”

Sara says she knows her teachers have made a huge difference and set her up for a bright future.

“Without the support and encouragement of my teachers and mentors, I honestly don’t know if I would have even applied to university, let alone secured a place, ” says Sara.

“… and not at just any university but one of the best in the world.

“I’ve got big goals for the future. I’d love to become a human rights lawyer, and maybe one day become an MP, to fight injustice and help others less fortunate than me.”

A Teach First spokesperson said: “There will be young people like Sara in every classroom who need help.

“Great teachers need good communication skills, an ability to adapt their approach to each child, and ultimately resilience to persevere and not accept failure as inevitable.”

“We’ve made great strides but sadly it’s still the case that the majority of young people from low income backgrounds leave school without the grades they’ll need to succeed in life. It’ll be a challenge to change this, but will it be impossible? No.”

Dream big and aim high – the female councillor leading from...