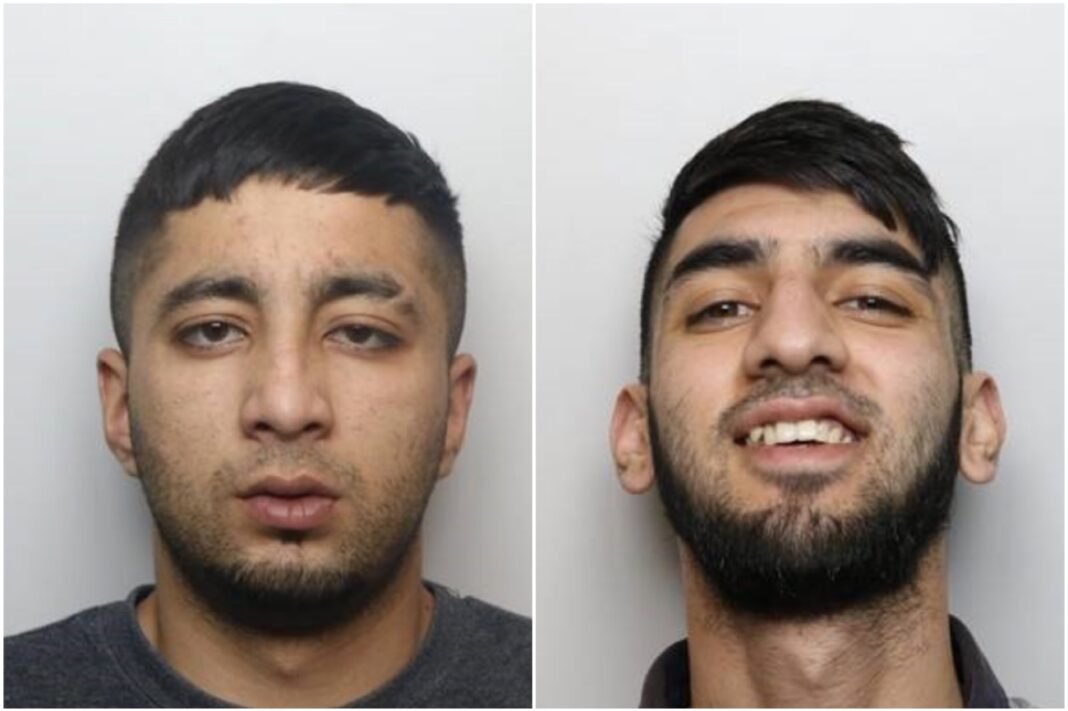 Two men have been jailed for more than 50 years for attempted murder over failed ‘contract killing’ and an armed robbery of a local businessman.

In Britannia Gardens, Pudsey, they had fired 12 shots through the doors and windows of a house, in what the jury heard was likely failed contract killing. At the time of the shootings there were people inside, but no one was injured.

Jurors heard that the two men had been hired to kill the man who lived there over a drugs dispute.

The attempted murder took place on June 10, 2018, when the defendants lay in wait for the man in an alleyway at the side of the property on Britannia Gardens with a 9mm pistol and a sawn-off shotgun.

The court heard that shots were then fired at head height through the door and kitchen window. Some of the bullets went through the “full depth” of the house but the couple survived the attack without being injured.

The pair were also found guilty of a robbery at business premises close to Maharaja Fabrics in Cemetery Road, Bradford, at 7.30pm on Sunday, December 9, 2018.

The victim was entering the premises with a large amount of cash when he was chased back inside.

He was then punched and kicked, and threatened with a gun before the suspects fled with £7,000. A second man, an employee, suffered minor head injuries after being knocked unconscious.

Sentencing the men, Judge Rodney Jameson QC said that Khan and Awan were “dangerous offenders posing a high risk of serious harm to the public”.

The court heard Khan was also paid to shoot at a man on Withins Close, Bradford, on June 25, 2019. CCTV footage from the area showed children running from the street as the shots were fired.

Khan was also involved in a drug smuggling offence during the period of offending.

He pleaded guilty to importing a class A drug.

Khan was given an extended prison sentence of 33-and-a-half years. He must serve a custodial term of 28-and-a-half years, of which two-thirds must be spent in prison, followed by a further five years on licence.

Judge Jameson told Khan: “You think of yourself as a gangster and acted as one in a very serious series of offences.

“You are lacking in remorse. You are in my judgement a very dangerous man.”

Awan was found guilty of attempted murder, two offences of possessing a firearm with intent to endanger life, robbery and possession of an imitation firearm.

He was given an extended sentence of 24 years. Awan was told he must serve a custodial term of 21 years followed by a further licence period of three years.

Detective Superintendent Carl Galvin (Protective Services, Crime), West Yorkshire Police lead for serious and organised crime commented: “The shooting in Pudsey and the subsequent robbery caused considerable and understandable concern in the local community, but I am pleased to say that the two offenders have now been brought to justice.

“The thorough and detailed investigations into what happened and the subsequent extended sentences these two have received show that such incidents will not be tolerated.

“Officers working on Programme Precision, assisted by colleagues in Districts and wider partners are working together to prevent serious and organised crime from happening in the first place and then bringing offenders to justice when it does.

“Thankfully no one was injured during the shooting in Pudsey, but it was a very distressing time for the people inside. Likewise, the robbery in Bradford was a very traumatic experience for the victim.

“I hope that the lengthy sentences handed down to these two will bring some closure to and help to reassure the communities we serve that this level of criminality will not be tolerated.”

Alpha United recognized by FA for their services to local community