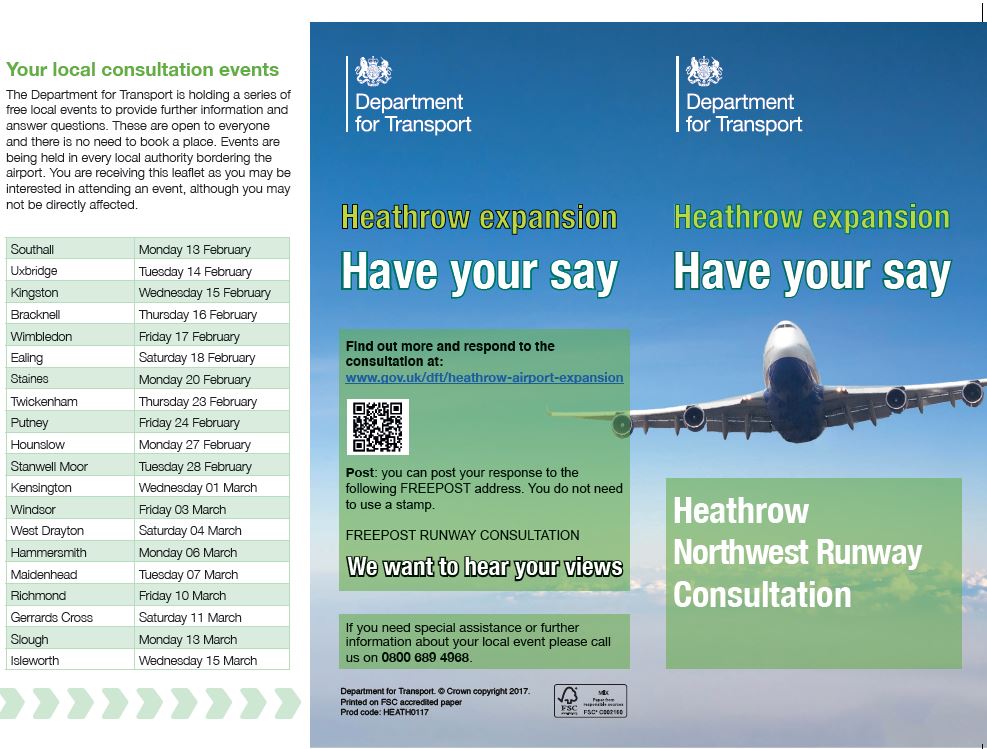 Transport Secretary Chris Grayling has taken a major step forward in preparing Britain for leaving the EU by publishing proposals for a third runway at Heathrow Airport.

A national public consultation begins today into one of the UK’s most important infrastructure projects which will help build a Global Britain.

The planning policy proposals show this Government is not only making the big decisions but getting on with delivering them.

This will ensure Britain seizes the opportunity to forge a new role in the world after Brexit, supported by the right infrastructure.

On 25 October 2016, Transport Secretary Chris Grayling confirmed that the Government’s preferred scheme for adding new runway capacity in the South East is through a new Northwest Runway at Heathrow Airport, in line with the recommendation made by the independent Airports Commission, and that the policy for this would be brought forward by way of a draft National Policy Statement (NPS) which would be subject to public consultation.

This move, taken for the country as a whole, will ensure Britain has the connections it needs to thrive in the global market, sending a clear signal that Britain is open for business, and we are creating an economy that works for everyone.

The Government’s draft NPS, “Airports National Policy Statement: new runway capacity and infrastructure at airports in the South East of England”, lays down the planning policy framework which the applicant for a new Northwest runway would have to comply with in order to get development consent. It also sets out the need for additional airport capacity in the South East and the reasons why a Northwest runway at Heathrow is the Government’s preferred scheme.

An NPS is more appropriate for this proposed development because it provides clarity, is speedier and less costly to the taxpayer.

and promoting us on the world stage.

to forge a new role in the world. We are determined to seize that opportunity an

having the right infrastructure in place will allow us to build a more Global Britain.

By backing the Northwest runway at Heathrow airport and publishing our proposals,

we are sending a clear signal that when we leave the EU, we are open for business.

important, major infrastructure projects. Now we want to hear your views on it. This

The draft NPS is now open to a 16-week extensive public consultation to ensure people have the opportunity to contribute their views. The Secretary of State for Transport will use the NPS as the basis for making decisions on any future development consent application for a new Northwest runway at Heathrow Airport.

Although the NPS will apply to England only, given the national significance of a Northwest Runway at Heathrow, the Government is consulting across the UK. This will include people who could benefit from expansion at Heathrow and communities who may be directly affected by expansion.

During the consultation, there will be a series of local information events. Around the airport, there will be 20 one-day events for members of the public. There will be a further 13 events taking place in the nations and regions across the UK for business, industry and other interested parties.

The draft NPS sets out the measures with which Heathrow Airport Ltd will have to comply in order to get development consent. These include:

Key benefits of the new Northwest runway are expected to be:

passengers travelling from UK airports in 2040; and

Heathrow is already the UK’s biggest freight port by value and a new runway will provide a post-Brexit boost for exports.  Heathrow’s expansion will open up new links between the UK and markets around the world.  It will connect UK goods and services to global customers and make the UK a more attractive location for inward investment.

We are building on Heathrow’s pledges on compensation to put forward a world-class package worth up to £2.6 billion. Planning consent will only be granted if the new runway can be delivered within existing air quality limits and climate change obligations. Proposals for expansion also include a six-and-a-half hour ban on scheduled night flights for the first time.

The Government has appointed Sir Jeremy Sullivan, the former Lord Justice of Appeal, to independently oversee the consultation process and ensure it is run fairly.

Alongside the draft NPS, the Government has also published today separate proposals to modernise the way UK airspace is managed. This consultation; “UK Airspace Policy: A framework for balanced decisions on the design and use of airspace” is seeking views on how aircraft noise is managed effectively while updating airspace policies. Proposals will look at how the number of aircraft entering and leaving our airspace can be managed effectively – using the latest technology to make airspace more efficient, reducing the need for stacking and making journeys faster and more environmentally friendly. They will also include draft guidance on how noise impacts should be assessed and used to inform decisions on airspace.

The consultation also includes proposals on the role of an Independent Commission on Civil Aviation Noise, which we will establish. The Commission would build relationships between industry and communities and ensure an even fairer process for making changes to the use of airspace and flight paths.

These proposals will influence decisions taken later in the planning process for a Northwest runway at Heathrow, including how local communities can have their say on airspace matters and how impacts on them are taken into account.

Both consultations start from today and last for 16 weeks, closing on May 25th.

Public consultation events are taking place across the country.

The Government has granted planning permission for works at Heathrow Airport (today) which, when complete, will enable full use of both runways subsequent to the Government’s earlier decision to end the Cranford Agreement. These works will result in a fairer distribution of aircraft noise in built-up areas close to Heathrow Airport. They do not allow for any increase in the number of permitted movements from the airport.