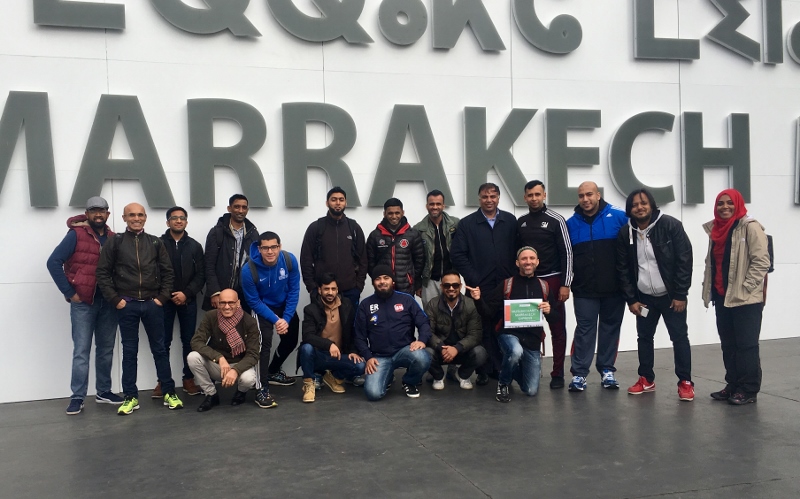 An enthusiastic group of 16 men have got their running shoes all tied up and have landed in Morocco, all set to take part in the Marrakech Half Marathon.

The team of runners from Whitechapel are raising funds on Sunday’s 29th January, to support the Muslim Charity’s grassroots work supporting vulnerable street children in Dhaka, the capital city of Bangladesh.

Rashid Ali, Programme Officer at Muslim Charity will be co-ordinating the team over the next few days with cultural visits and light training plans as part of preparations for the big day.

Harun Rashid, head of fundraising at Muslim Charity reported to the Asian Express: “We have arrived safe and sound, and the next few days we will be enjoying some time to relax, prepare and gather our thoughts.

“Huge thanks go out to all our runners and supporters who have made this journey a success even before we have crossed the starting line.”

Under the high patronage of King Mohammed VI, the International Marathon of Marrakech this year is hosting its twenty-sixth edition. More than 8000 runners from all over the world will take part in what is considered one of the most prestigious Marathons in the world.

The magical town of Marrakech offers an exceptional setting, a very mild climate in January and a beautiful circuit considered as one of the fastest in the world. It goes along the alleys of palm trees, orange, and olive-trees, but also the ramparts of the city.

Runner Abdal Ahmed added: “We have a beautiful cause and request everyone’s well wishes for a successful trip. Thank all our sponsors for their tremendous support.”

Muslim Charity was founded over 15-years-ago as a compassionate response to suffering and to tackle poverty across the globe.

The charity has been able to touch millions of vulnerable lives and implement hundreds of relief and development projects without any racial, religious or linguistic discrimination.

Getting Family-ar with charity: Siblings call on Yorkshire to get volunteering