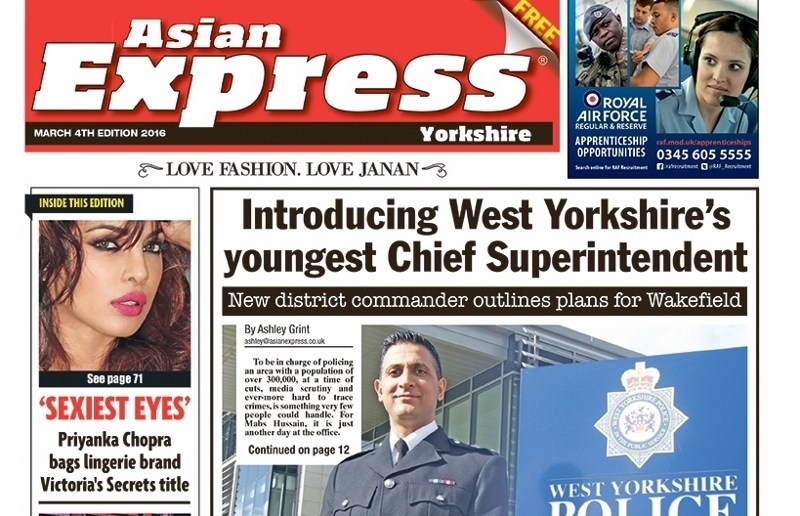 January – February: 2016 didn’t start the way many Yorkshire residents would have hoped for as the Boxing Day floods continued to take their toll on communities throughout the county.

Thankfully, we also saw the amazing efforts of ordinary people who went the extra mile to help others in their time of need. Kirkstall Road was one of the hardest hit areas, costing businesses millions of pounds worth of damage, with many still struggling to recover today.

Later in January, then Prime Minister David Cameron visited Leeds and paid a visit to the Makkah Masjid where he announced an extra £22million funding for Muslim women in the UK to learn English.

The month closed with the tragic Drummond Mill fire, causing one of Bradford’s landmark building to perish in an inferno.

Some of the Asian Express highlights throughout January and February included a teenager honoured for saving friends from a hoverboard house fire, Bradford’s own Faheem wowing Will.i.am on The Voice, and boxer Tasif Khan securing what-would-be his first world title of the year.

International headlines provoked reaction from all communities as Brussels was attacked by terrorists, causing the death of 31 and injuring 260 others. It would be the first of many high profile incidents throughout the year.

On a positive note, West Yorkshire welcomed in its youngest Chief Superintendent as Mabs Hussain took up his position with the police force.

Vaisakhi arrived at the start of April, whilst smiles were stretched from cheek-to-cheek as Nadiya baked the Queen’s birthday cake and residents in North Leeds celebrated the saving of a community green belt in Gledhow Valley Woods.

May – June: Harpinder Rai became the new Miss Leeds as she took the city’s crown in what was her inaugural beauty competition, whilst Bradford’s Adeeba Malik secured a new title of her own as she was bestowed with a CBE at Buckingham Palace.

More good news followed for the region in early June, with a local hairdresser landing a place on a prestigious course in Italy and more royal honours for community stalwarts.

Sadly, June was also the month which the nation lost one of its most loved MPs as Jo Cox was tragically killed in her constituency of Batley and Spen. Her killer, Thomas Mair, was jailed for life later in the year.

June also brought more shocks to the world as Britain voted to leave the EU in the Brexit referendum.

July – August: Hate incidents increased throughout the country following the Brexit vote, with one Wakefield MP telling the Asian Express ‘I voted Leave, not Racism’ after being targeted in a verbal assault.

On a more positive note, Hanif Malik became the first Asian director to be appointed to the board of Yorkshire County Cricket Club and record A Level results were seen for some of the region’s schools.

Police admitted that they had to ‘learn lessons’ following a hate incident at the local Guru Gobind Singh Gurdwara in Bradford, which saw the Guru Granth Sahib Ji thrown over the temple’s gates. Thankfully, an apology was eventually accepted with the guilty party admitting a lack of knowledge about Sikh customs.

A super slimmer who shed half his body weight through will power, communities raising thousands of pounds for charities through the sale of chocolate cakes and LGI’s ear pioneer, Dr Sanjay Verma, also made the headlines.

A local hero battled through flames in September to rescue a man from a burning building. Arshad Khan, who runs a shop in Bradford, risked his own life to rescue a neighbour from his smoking flat and was praised by firefighters.

It seems that Autumn was a month for superheroes of all kinds, with even a schoolgirl returning a wallet containing wads of cash to its rightful owner (cue Wallet Wondergirl Ammara Khan).

October was a month which will be remembered for its sadder moments. 11-year old Asad Khan committed suicide after he was bullied repeatedly at school.

To touch upon a brighter story, a little boy with a ‘big heart’ gave all his birthday presents away to refugee children in Syria. Six-year-old Joseph Al-Fadhili even asked his dad if he could visit the Jungle to see how people were living out there.

To round off a jam-packed month, Asian Express said goodbye to wonderful Karam Chand, who sadly passed away at the incredible age of 110, after an amazing 91 years of marriage.

November – December: The wintery months were all about power women and girl power! Fozia Shaheen was named Young Councillor of the Year and Saima Hussain received an honorary fellowship from Bradford College for her groundbreaking work in raising the profile for women in rugby league.

A standout story this year would have to be Matt and Naz’s heartbreaking story of suicide related to religious homophobia, and spreading the message to our readers that they are ‘not alone’ if they are starting to question their own sexuality.

In December, Muzdalfa Ahmed made her speech in the House of Commons and received a standing ovation. At 17, the Member of Youth Parliament will certainly be a name to look out for in the world of politics. Other memorable stories included Mumtaz hosting their festive Christmas dinner for the homeless and an award-winning doctor – Safia Jabeen – taking the shame out of STD’s.

Most memorable quote: Jo Cox: “We are far more united and have far more in common with each other than things that divide us”