A sporty teenager from Leeds has added another trophy to his growing collection this past week, this time without even having to lift a bat.

At the British Muslim Awards 2016, Shayan Siraj, from Bramhope, was named the recipient of the ‘Best at Sport’ award, commending his growing reputation in the sporting world.

The 14-year-old was the youngest award winner on the night, and was selected ahead of boxers, a badminton player and footballer from the final shortlist.

Shayan’s father, Waseem, says his son was delighted to win the accolade and revelled in the experience the night.

“Shayan takes everything in his stride and never gets ahead of himself so when he was named winner, he was very mature about it all,” Waseem said.

“He wasn’t expecting to win the award but was delighted when they called out his name.”

The Grammar School at Leeds (GSAL) pupil has been playing table tennis since the age of seven and began representing Yorkshire while still at junior school.

Aged 12, he made his debut representing England in an international competition and just last year, the young sportsman became a double national champion with Table Tennis England.

Waseem added: “The awards were quite enlightening and it was empowering to see so many people from the Muslim community, who had done some amazing work, getting the recognition they deserve.

“Shayan’s certainly got a lot more to offer and is targeting the 2020 Olympics. We know it’s a long road but he has the commitment and drive to make it.”

Now in its fourth year, the British Muslim Awards are presented by Al Rayan Bank to recognise a wide range of achievements in business, charity, sport, arts and culture, reflecting the breadth of contribution by British Muslims.

The shortlist of finalists was drawn up from thousands of nominations submitted by members of the public. 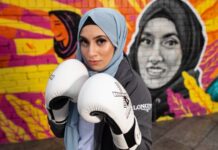 Stars and selfies at Mumtaz