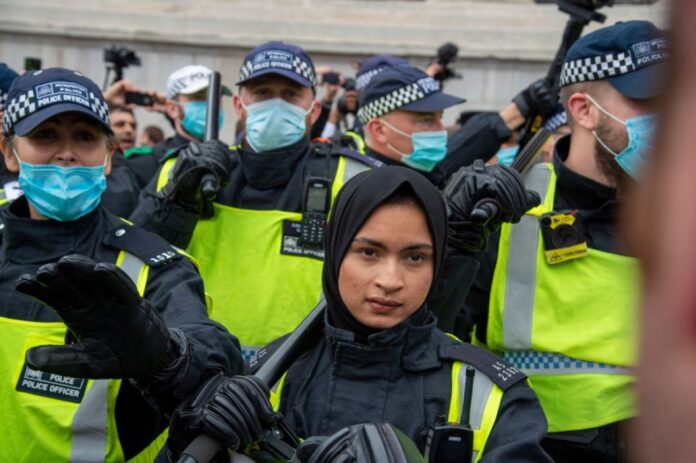 A petite hijab-wearing police officer on the frontline during a volatile coronavirus protest in central London has been the target of racist and Islamophobic abuse.

The unnamed Metropolitan Police officer was serving on the frontline amid violent clashes at the anti-lockdown protest on Saturday 26th September in Trafalgar Square.

Officers used batons to control the crowds, after bottles and water were thrown at them by demonstrators who were chanting ‘pick your side’ at the ‘We Do Not Consent’ rally in Trafalgar Square.

Nine police officers were injured, two of whom required hospital treatment, and a total of 16 arrests were made.

After bravely putting herself in harm’s way by holding the line against violent protesters, in the video footage the female Muslim officer can be seen in the thick of it with fellow officers trying to control the crowds.

One person wrote: ‘She is dressing like a militant. Easy to equate hijab with salafism. Easy to imagine she has an agenda. Hard to tell the difference between your modern times and 7th Century Arabia.’

Another called the picture a ‘political correctness stunt’ while another person said she was ‘picked for the job because she’s Muslim and with hijab’.

One troll added: ‘If she gets her own way you’ll all soon be wearing those burkha things’, while another said: ‘NO FACE MASK! But then Muslims are exempt from the same laws as the rest of us.’

While another added: ‘Hard to envisage in a time gone by that a police officer would de able to dictate her dress/uniform… Unreal and totally not needed or wanted…’

Some pointed out that criticism of the officer’s uniform wasn’t because of her faith but because she wasn’t wearing a mask or police cap.

But video footage of the clash showing other colleagues not wearing masks gave rise to people questioning if the officer was being targeted simply because of her faith or ethnicity.

As standard issue surgical masks are attached with ear loops and are not designed for long periods of use, they are not convenient for people wearing hijabs, although other alternative masks are available.

A policeman at the scene said some officers had their masks ripped off by protesters, while others temporarily removed them because they got in the way amidst the chaos.

Tweeting under the name Sergeant Xl, he said: ‘You’ll see it was a large group of angry people, keen on attacking me and. (my) officers. The masks are not designed to be robust for situations like this and in fact they created some risk whilst trying to protect ourselves, masks came off.

‘There were others without masks here, myself included. I stand by the many reasons they were ditched by each officer. Question is, why are you picking on the non-white constable?

‘This is a non-issue. But if you really want to grind an axe, come speak to me.’

Jumping to the officer’s defence on Twitter, Jo Bethel said: ‘Oh the irony, I bet you were one of those who complained about Muslim women wearing a mask before this virus turned the world upside down. She is a police officer. She has my respect. End of.’

Met Police Chief Supt Roy Smith Roy Smith tweeted: ‘Lots of social media commentary about this officer. Not sure what the fuss is about.

‘I see a professional & brave police officer, my colleague, doing her job just like every other cop that day. A few people need to catch up with modern times. Nothing more to discuss.’