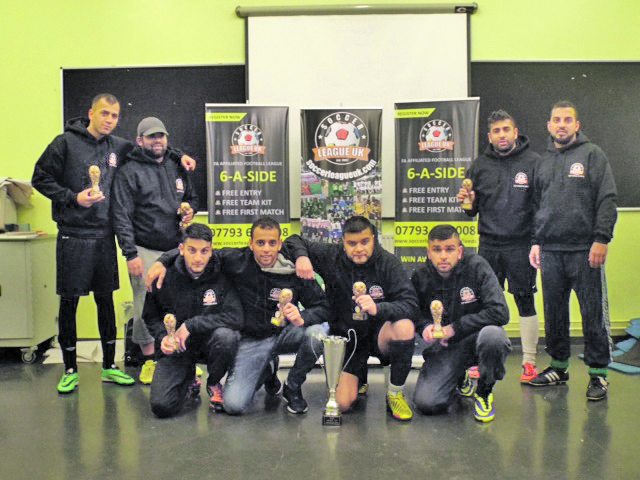 Hyde Park may have been coming into this cup week as the favourites to lift the trophy yet a disciplined performance from one of league’s top defences saw a vintage cup upset on the cards in the semi-final.

Tetley’s Tino may be 11 points off the table toppers in the SLUK table yet the form book was thrown out of the window on Tuesday at the underdogs pulled off a 1-0 victory.

Abdul Wahab making his debut for Tino having previously played for the league leaders, netted the winner midway through the second half.

The two sides were evenly matched throughout yet the better chances fell to Tino early on, with Hasan Abrar coming agonisingly close to opening the scoring in the early stages producing a brilliant save from Nazeem Hussain.

Minutes later, from a corner, Abrar once again found himself in a glorious position and should have scored but blazed his effort just over the bar.

Hyde Park were dominating possession yet were struggling to breakdown a side who have only conceded five league goals this season in their 12 games.

Backing up that resolute defence was a dangerous looking counter attack and when Abrar once again broke through, following good play from Shazad Hussain, he looked destined to score yet Hyde Park shot-stopper had other ideas, pulling off a fine save.

The league’s high-flyers did improve in the second half with an early effort from Kadeem Walker narrowly missing the inside of the post and deflecting into the side netting.

As it looked like penalties may be needed to decide the contest, Wahab picked up the ball from a kick-in, turned his man, and coolly slotted the ball past the advancing goalkeeper.

Hyde Park did turn on the offensive as time was running out yet like many sides this season, they failed to find a way through the impenetrable defence, and were subsequently out of the cup.

Penalties were needed to separate Old Bacca Boys and Samba FC last week as a closely-fought contest was eventually won by the prior, following a stalemate in normal time.

Samba FC, having conceded 32 goals in their 12 league games, may have been the underdogs against at kick off yet there was nothing to separate the sides in the early stages.

In front of an expectant crowd, an even game was played out in the early exchanges with OBB’s Nikash Yousef coming closest to opening the scoring on two occasions with two deflected strikes.

A rare solid defensive performance from their opponents saw OBB start to get frustrated and the side were looking susceptible on the counter-attack.

Shazad and Jhoyed Ali both came close with efforts, one just edging past the post and the other, despite being seetly struck, landing right in the arms of OBB’s keeper.

Much like the Hyde Park game, played prior to this semi-final, it seemed the game was destined to end in a goalless draw until a moment of madness moments before the final whistle.

A routine corner kick for OBB didn’t seem to pose any danger until one of the Samba defenders were penalised for entering the ‘D area’ and due to the rules of Soccer League six-a-side, a penalty was awarded.

With the final in touching distance, up stepped Sultan Khan, yet to the shock of an ever-growing crowd, Samba shot stopper, Wasim Akram, pulled off a fine save to all but take the game onto penalties.

Goalless in normal time, Samba just lacked the clinical edge in the resulting shootout as OBB went on to steal a 2-1 win and advance into the cup final.

It was a final where both keepers took centre stage initially before a huge penalty shootout, with 24 efforts on goal, took place resulting in Old Bacca Boys lifting this season’s SLUK Cup.

With both teams having scraped their semi-finals earlier in the night, many may have expected a slow-paced encounter yet this certainly was not the case.

A man-of-the-match performance from OBB keeper, Gulfraz Satti, saw him come close to breaking the deadlock on a number of occasions, with his first powerful effort smartly saved by Ziyad Hussain.

At the other end of the pitch, Tino’s Shazad Hussain was trying his best to turn the screw in front of goal and came close with a deflected effort that trickled just wide of the post.

This was quickly followed up by Hasan Abrar who fired narrowly over from a trademark corner kick.

The game definitely had the feel of a local derby, with tackles flying in, but it was OBB who looked more threatening early on, with Satti again coming close, only for the keeper to deny him again.

The game began to stretch as both sides were struggling to keep in their second game of the night, with Tino’s Hasan Noshi and Abrar presented with great chances but failing to convert.

A stalemate at the final whistle meant a second shootout of the night, with OBB still yet to score a goal in normal time.

Yet that did nothing to deter their confidence as an amazing 24 penalties were seen before a victor was finally crowned as OBB walked away with this year’s trophy.

MOTM: Gulfraz Satti may have been unable to find the single goal to settle the contest before penalties yet proved a constant threat throughout.

Gulfraz Satti’s man-of-the-match performance in the final was enough for him to be named as this season’s Player of the Tournament. A dedicated performance throughout the semi-final and final saw him lead by example on the way to OBB clinching the SLUK Cup.

Rashid’s too SUPER for NFA