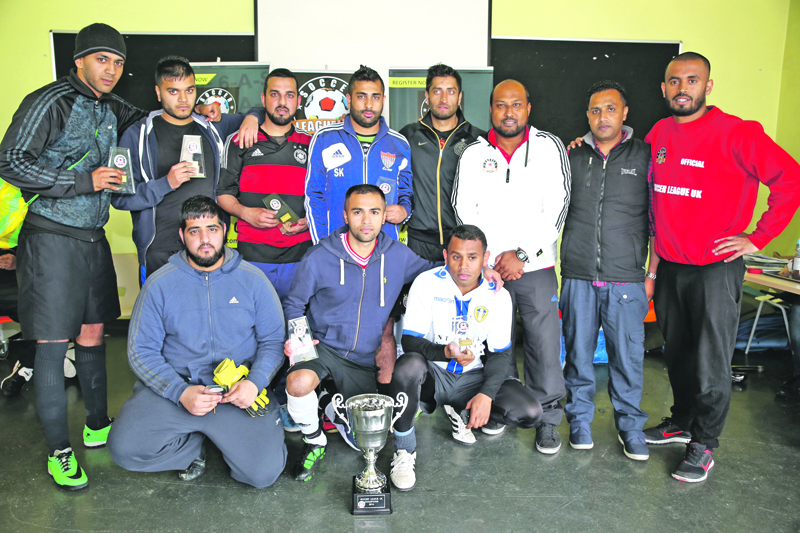 With both sides looking to gain ground on top spot, Old Bacca Boys and Borussia Teeth faced off in a close encounter which either team could have won, yet neither eventually did.

Both teams were coming into the game full of confidence following convincing displays last week, and it was Old Bacca Boys who had the best of the early chances.

Arman Yasim eventually opened the scoring for the Boys with a comfortable finish, temporarily moving his side to within one point of top spot.

However, when facing off against the league’s most lethal strike force, it is always going to be a challenge to keep a clean sheet, as Old Bacca Boys soon found out.

Goal-machine Hamza Ismail was a constant threat throughout the game and finally found the back of the net, to claim his 14th of the season.

The sides both had chances to win it late on yet as time ran out, it seemed the Bacca Boys and Borussia Teeth were happy to settle for the point.

The opening fixture of this week’s Soccer League failed to produce any goals as NFA lost the chance to take temporary lead at the top of the table, drawing 0-0 with Al Aqs.

It is the second goalless draw in a row for NFA, who failed to find a way past an inspired Al Aqs defence.

Asim ‘Jimmy’ Rashid was in fine form as the shot stopper refused to let anything pass into his goal, frustrating the favourites with a string of fine saves.

Al Aqs first draw of the season may be their best result this campaign, whilst NFA will be wondering why they weren’t able to bag one goal, against a side that had shipped 11 in their last three outings.

After watching their closest rival drop points in an unlikely encounter with Al Aqs, Hyde Park knew that a win over the league’s bottom side would propel them two points clear at the top.

However, as is the case with the unpredictable game of football, things didn’t exactly go to plan for Hyde Park.

The table-toppers faced off against Super Six, who impressed last week in a narrow 1-0 defeat at the hands of Tetley’s Tino.

Things seemed to be going to plan when Tyler Bussue claimed his tenth goal of the season to put the high flyers ahead. Yet, with only one minute left on the clock, Razza Rafique fired in a fine goal to deny Hyde Park a cushion at the top of the league.

MOTM: Hyde Park’s Waleed Akhtar impressed from the first to the last whistle.

After an unfortunate defeat at the hands of Borussia Teeth last week, Samba FC picked up their third win of the season this week with a 1-0 triumph against Tetley’s Tino.

Imran Khan grabbed the only goal of the game whilst the notoriously leaky defence, which had shipped 26 goals in just nine games previously, stayed strong throughout.

Qammar Hussain starred for the victors to guide his side to a deserved win against what had been the league’s joint best defence, conceding just three goals before this week’s fixture.

MOTM: The ever reliant Qammar Hussain picked up this week’s individual accolade.

With teams above them slipping up, last week’s team of the week Jubodhol took full advantage, making it back-to-back wins as they defeated Half a Dozen by the solitary goal.

Hamid Ali once again found his name on the scoresheet with the only goal of the game.

All four sides above Jubodhol drew, meaning they gained ground on this year’s high flyers.

MOTM: Nurul Miah’s fine passing display was a highlight in the one-goal affair.

Player of the week:

Old Bacca Boys may have lost the chance to move to within one point of top spot yet Suliman Khan still delivered a stand out performance to earn the individual accolade of Player of the Week. His side will have to step up their performance next week if they are to triumph over an Al Aqs side who will be full of confidence following their goalless draw with high flying NFA.

BLACKS SOLICITORS: Landlord’s Consent – a step too far could be...