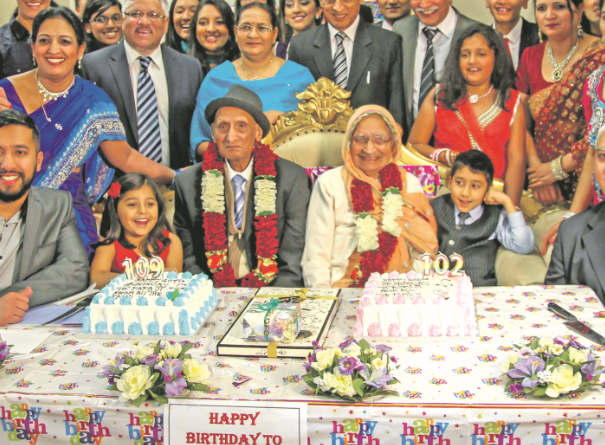 211 reasons to celebrate in Manningham

A married couple in Bradford are running out of room on their birthday cakes for candles after a joint birthday party was held last weekend to mark their 102nd and 109th birthdays.

Even more remarkable perhaps is that the couple have been married for an astonishing 89 years next month, giving the Chand family even more reasons to celebrate.

Karam and Katari Chand are considered to have the longest marriage in the world after tying the knot in the Punjab in 1925, in a traditional Sikh ceremony.

On Sunday 23rd November, family, friends and esteemed guests came together to celebrate their latest milestone as they passed another birthday in good health.

A joint celebration was held for Karam, who turned 109 on 11th November, and Katari who was 102, ten days earlier.

Family travelled from as far away as India to join in the celebrations with Dr Sodhi Ram, the couple’s eldest son, making the tiring journey alongside his wife.

Paul Chand, another of the Chand’s eight children, said it was one of the greatest days of his parent’s lives as they were able to see so many members of their family, all under one roof.

“It was a great celebration and we had people come from all over to celebrate with my Mum and Dad,” he said.

“It is their anniversary next month and that will be another party but last weekend’s was really special.

“To reach 109 and 102 years old is fantastic and we all, as a family, want to wish them the best for many more years to come.”

Karam and Katari moved to Bradford in 1965 and have family living around the world, including 30 grandchildren and another 30 great grandchildren.

Amongst other guests at the Carlisle Business Centre on Sunday were Bradford’s deputy mayor Roger L’Amie, Deputy Lord Lieutenant of Yorkshire David Pearson and Fazal Hussain MBE, on behalf of the Muslim community.

‘Bullies need kicking out of school’