Pupils from Lady Royd Primary were thrilled to welcome Bradford City striker James Hanson to the school last week to speak about his move from co-op shelf stacker, to Wembley goal hero.

The towering centre forward spoke to pupils about the motivation and determination needed to succeed in life and about his own accomplishments in football.

After a short montage of the club’s finest goal scoring moments, and a sing-along to the Bantam supporter’s song, the 26-year-old was happy to answer questions from his enthralled audience of young fans.

He talked about his love of football from a very young age and playing for Huddersfield Town Academy, a team that is still his favourite today.

Hanson started his senior career playing semi-professional non-league football with Eccleshill United and Guiseley, balancing his football career with a job in his local Co-operative supermarket.

With 46 goals scored in just two seasons he said he was ‘delighted’ to catch the eye of Bradford boss Stuart McCall who immediately signed him for Bradford City, where he has been a fan’s favourite since 2009.

Born and raised in Bradford, he admitted that being a professional footballer is his absolute dream job, especially playing for his local team and even better when the team is playing well.

“I have been at Bradford City now for six years and I love every minute of it,” he told his young admirers.

Asked about his training and particularly how he scored so many goals, James explained how he trained every day, with the schedule dependent on the matches ahead.

He put his goal-scoring success down to shear hard work and having the right attitude and encouraged all the children that, whatever they chose to do, these were certainly the best qualities to adopt.

Finally, as might be expected, he was asked about that winning goal against Aston Villa that secured Bradford City’s historic place in the League Cup final at Wembley.

“I had not scored for a while so I was particularly pleased with that goal” he said. “It felt like the best feeling in the world when it went in the back of the net.”

Staff at Lady Royd added their gratitude to the striker for calling in to the school, with Mr Sheard adding: “He is a very inspirational young man and a great role model for our young pupils…and of course he is from Bradford.” 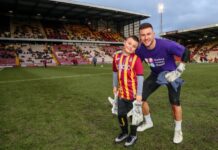