The religious practices of hundreds of millions of people have undergone profound changes in response to the Covid-19 pandemic.

At a time when many would turn to their faith to ease their fears about the pandemic, social distancing measures have meant that congregations and religious gatherings have not been possible.

But in the midst of the restrictions of the coronavirus pandemic, the Hindu community has turned to digital platforms to celebrate Navratri – one of the biggest Hindu festivals of the year.

The Bolton Hindu Forum’s annual Navratri event has been organised as a virtual event taking place online from 17th to 25th October.

Along with celebrating the festival over the nine nights, traditional dance workshops for Garba and Rass Garba (stick dance) were organised via Facebook ahead of Navratri.

Navratri (translates as nine nights) symbolises the triumph of good over evil, and takes place at the beginning of October around harvest time. The festival is celebrated for nine days all across the globe with communities getting together for dances and nightly feasts.

Manu Mistry, CEO of Bolton Hindu Forum said: “The crisis has prompted many religious leaders to appeal to their followers to not only take safety precautions but also to embrace their spirituality to help confront the health, social, and economic challenges ahead.

“Keeping this in mind we have organised this year’s Navrarti event on digital platforms. People can join us by logging into a video link.

“Last year we brought two of our big events to town, with an open invitation to people of other faiths to come join in the fun and enjoy this colourful and vibrant event.

“We had plans to make the 2020 even bigger and likewise we did our ‘Diwali On The Square’, which was the most talked about event last year.

“Sadly the regular events are not to be this year, however people can join the celebrations via our digital platforms. Everyone is warmly welcomed.”

Navratri is a Hindu festival that spans nine nights (and ten days) and is celebrated every year in the autumn. It is one of the greatest Hindu festivals and symbolises the triumph of good over evil.

The legend associated with Navratri speaks about the great battle that took place between the powerful demon Mahishasura and goddess Durga.

Mahishasura was blessed with immortality by Lord Brahma under one condition that the powerful Mahishasura could be defeated only by a woman.

Armed with the blessing of immortality and confidence, Mahishasura attacked the trilok – earth, heaven and hell. The worried gods prayed to Lord Brahma, Lord Vishnu and Lord Shiva to help them defeat him.

Lord Vishu – known as the god of destruction, is the most powerful god, took the decision to create a woman to defeat Mahishasura.

Lord Shiva and Lord Brahma put all their powers together into goddess Durga is a reincarnation of goddess Parvati (wife of Lord Shiva).

Shakti – another avatar of goddess Parvati – is the goddess of power that runs through the universe.

Goddess Durga fought with Mahishasura for 15 long days. It was a fight that shook the trilok—earth, heaven and hell.

During the fight, the clever demon Mahishasura kept changing his form to confuse her, ultimately when he took the form of a buffalo, the goddess Durga pierced his chest with her ‘trishul’ (a forked weapon) killing him instantly.

So, on each day of Navaratri different avatars of goddess Durga is worshipped.

The Navaratri festival that celebrates the defeat of Mahishasura by goddess Durga signifies the victory of good over evil. In some parts of India, people observe fast during Navaratri. On the last day the perform puja and break their fast. 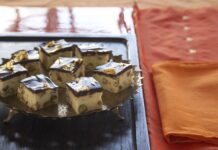