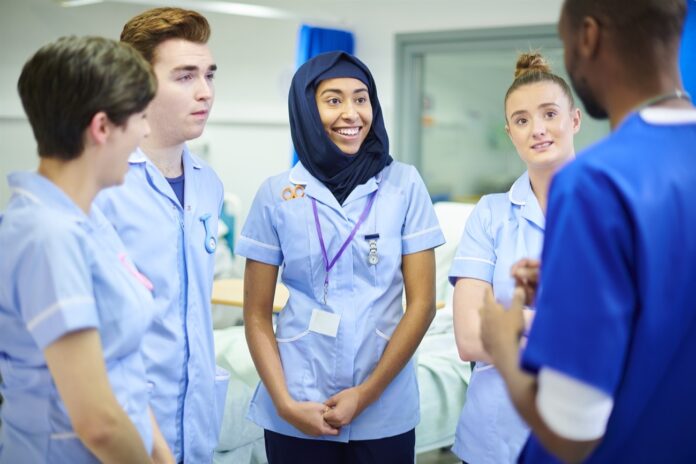 England’s chief nurse has issued a rallying call to those receiving their A-Level results tomorrow to join the thousands of their peers who have already applied to study nursing this year.

NHS staff including nurses have pulled out all the stops to treat over 100,000 COVID-19 patients as well as everyone else who needed care over the last six months.

While levels of appreciation amongst the public sky high, the health service is calling on young adults – dubbed the ‘Covid Generation’ due to the long term impact the virus is likely to have on their lives – to not just clap for carers, but to become one.

Interest is already high; the number of young men in England who have applied for nursing degrees already is the highest for five years.

They are among more than 17,000 young people (20 and under) living in England had applied to join a nursing degree course by June 30 – up around a sixth on 2018 – with a huge increase during the coronavirus pandemic

The figures, from the Universities and Colleges Admissions Service (UCAS), show a surge in applications for nursing degrees amongst all ages across the UK — up by 16% year-on-year to 47,320 by the end of June – with the increase attributed to the ‘leading role’ nurses have played in the country’s response to COVID-19.

With thousands of degree places available at dozens of universities across the country, grants between £5,000 and £8,000 per year available, starting salaries of £24,900 and no shortage of jobs when qualified, the NHS is seeking to highlight nursing as a strong career choice in “uncertain times”.

As part of the successful We Are The NHS campaign, NHS England will be intensifying its targeting of those getting their A-Levels tomorrow, with direct emails to 50,000 people and ads on Facebook, Instagram, Twitter and Snapchat appealing to those entering the clearing system to apply for nursing degrees.

The campaign will encourage those going through clearing to search ‘Nursing Careers’ to find out more about the huge opportunities offered in modern nursing.

This year an estimated 80,000 students are expected to be part of the UCAS clearing process, which offers available places on degree courses for those who want to change their post A-Level plans for whatever reason.

Ruth May, chief nursing officer for England, said: “The last six months has seen nurses and midwives play a leading role in the fight against coronavirus, cementing the high esteem they are held in by the nation, so it’s no surprise that interest in nursing degrees is already high.

“Uncertain times lay ahead, but one thing we can be sure of is that the country and the NHS will always need nurses, and that nursing will always offer a rewarding and varied career – making it a strong choice for any young people considering their options tomorrow.

“Even if a COVID-19 vaccine is found the NHS will still need all the staff it can get to help deliver on our Long Term Plan to save more lives and improve the country’s health.

“So whoever you are, whatever your background and wherever you want to go: your NHS needs you, so search ‘Nursing Careers’ today.”

The government has committed to grow this number by 50,000 over the next five years to help address a current shortfall which meant that, as of March, 36,000 nursing jobs were being advertised by NHS employers across the country.

The NHS has worked with universities to offer thousands of extra nursing places in higher education as part of the NHS Long Term Plan to build a workforce for the future of the health service.

The NHS People Plan, recently updated with actions for the coming months, also sets out the ambition to recruit and retain thousands more nurses alongside the other clinical staff the health service needs – with measures including more flexible working and wellbeing support aimed at supporting staff and making the NHS the best place to work.

The NHS is one of the top ten employers in the world, offering around 350 roles, employing more than 1.3 million people, and caring for around one million patients every day.

As well as nursing, a career in the NHS can include roles such as psychiatrist, lab technician, physio, paramedic, scientist, GP, surgeon, anesthetist and over 300 more.

The call on students to pick a career in nursing comes as the health service launches the next stage of the We are the NHS campaign – the largest ever jobs drive of its kind, helping to bring in a workforce to support delivery of Long Term Plan commitments like speeding up diagnosis of killer conditions, expanding world class mental health services and introducing cutting edge treatments like proton beam therapy for cancer.

Launching in 2018, the campaign saw a 4.5% increase in nursing applications in its first year, including a 9% rise in male nursing applicants as well as the number of 18 year olds applying going up by a fifth.