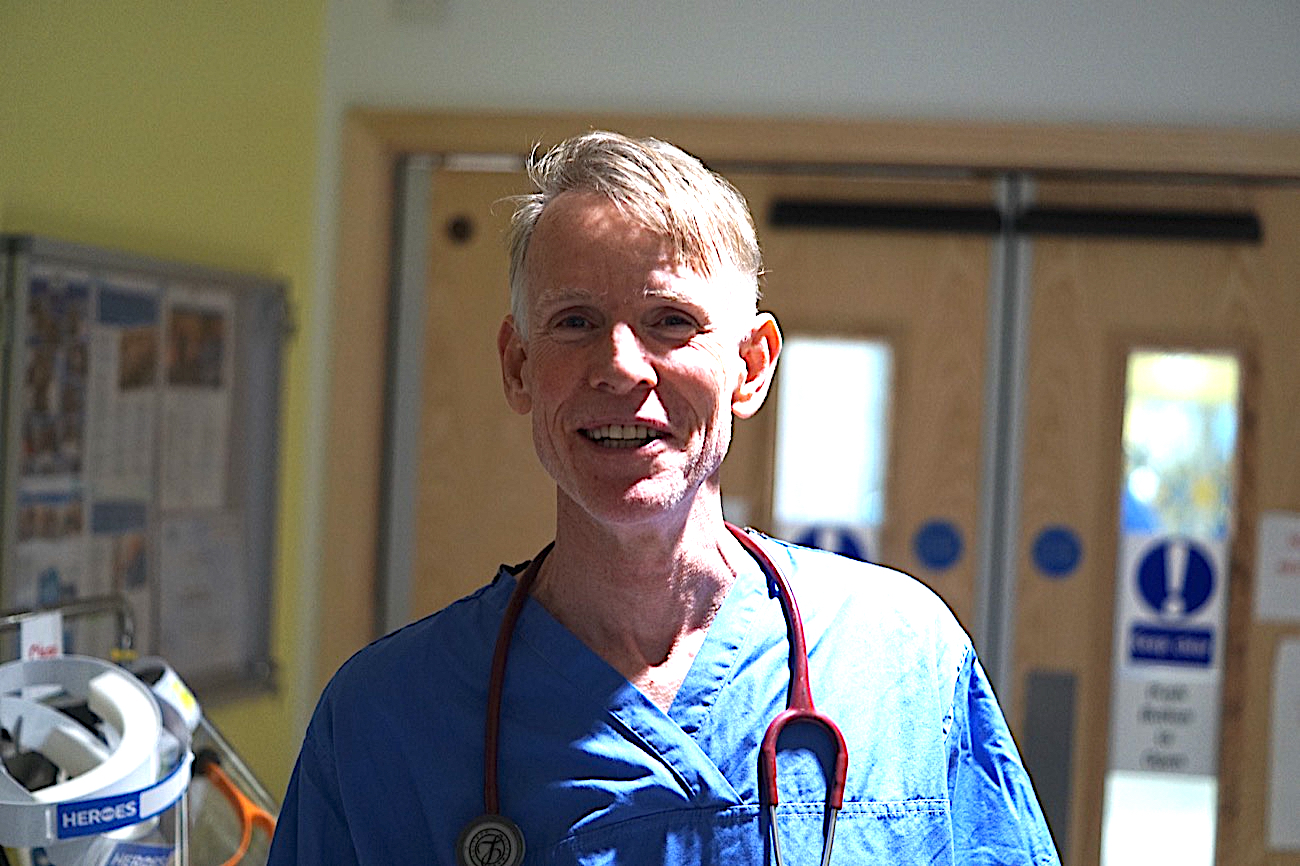 A clinician who played a leading role in responding to the Covid-19 outbreak in Bradford and set up one of the world’s largest research studies has been awarded an honorary degree from the University of Bradford.

Professor John Wright has received an Honorary Degree of Doctor of Health for his long standing contribution to the field of healthcare and support for the University and wider Bradford community.

A  clinician and epidemiologist with a background in hospital medicine and public health in the UK and in Africa, he has worked in virus hotspots around the world. He established and leads the Bradford Institute for Health Research and Wolfson Centre for Applied Health Research, working to speed up the translation of medical research into practice and policy.

Prof Wright has also played a leading role in responding to the Covid-19 outbreak in Bradford, as one of the front-line staff at Bradford Royal Infirmary (BRI), as a reporter for the BBC raising awareness on how the BRI is coping with Covid-19 and as a key communicator informing communities how to stay safe during the pandemic.

Commenting on the award, he said: “I am both humbled and delighted. I have worked with the University of Bradford for almost 25 years and taken great joy in how it has grown and become such a symbol of civic pride in the city.

“I also plagiarised the University motto: ‘Making Knowledge Work’, when we set up the Bradford Institute for Health Research 15 years ago. ‘Making Research Real’ is our motto… That’s’ what all graduating students can look forward to: making a difference. Covid 19 has darkened the skies but [graduates] are lanterns of hope.”

Professor Shirley Congdon, Vice Chancellor of the University of Bradford and newly appointed Chair of Yorkshire Universities, said: “Prof Wright has made major contributions in tackling the unacceptable inequalities in global health and more recently the fight against Covid-19. [He] is an inspiring individual who embodies the ‘Team Bradford’ spirit.

“We and our region are fortunate to have such a strong, determined and passionate research leader and it’s a privilege to award him the honorary Doctorate of Health.”

Prof Wright is Visiting Professor in Clinical Epidemiology at the Universities of Bradford, York and Leeds and has authored three text books and over 300 papers and been awarded over £145 million in research award funding, £40 million as chief investigator.

Passionate about tackling the unacceptable inequalities in global health, in 1997 he set up a partnership with the Ministry of Health in Swaziland and has attracted charitable donations, Elton John AIDS Foundation and DFID grants to support applied research at the epicentre of the HIV/AIDS and TB epidemics in Africa.

In 2007 he set up Born in Bradford, one of the largest research studies in the world, tracking the lives of over 30,000  children, to find out what influences their health and wellbeing, evidence from which is used to find the causes of common childhood illnesses and conditions and to explore the mental and social development of this generation.

In 2016, he set up Born in Bradford’s Better Start cohort to test new approaches to providing the best support in the crucial period of early life. In 2019 he established ActEarly – developing a whole systems City Collaboratory approach to improving the health and life chances of children from deprived communities in London and Yorkshire.

He leads the Applied Health Research Unit in Swaziland and has provided 20 years of sustainable research with the UK. He has previously been Medical Advisor for Doctors of the World and in 2014 led their emergency response in Sierra Leone, setting up and running an Ebola Treatment Centre in extreme adversity. He was awarded the West Africa Medal by the Prime Minister.

Proving a great advocate for public engagement in science and research and has considerable experience in promoting research through mainstream and social media channels. He has extensive television experience (BBC, ITV, Sky) and has reported and presented for BBC Radio 4 for their long-running Born in Bradford series and for numerous programmes on international health. Most recently he recorded a series of programmes and podcasts for the BBC and World Service on ‘The NHS Frontline’ during the Covid-19 emergency.