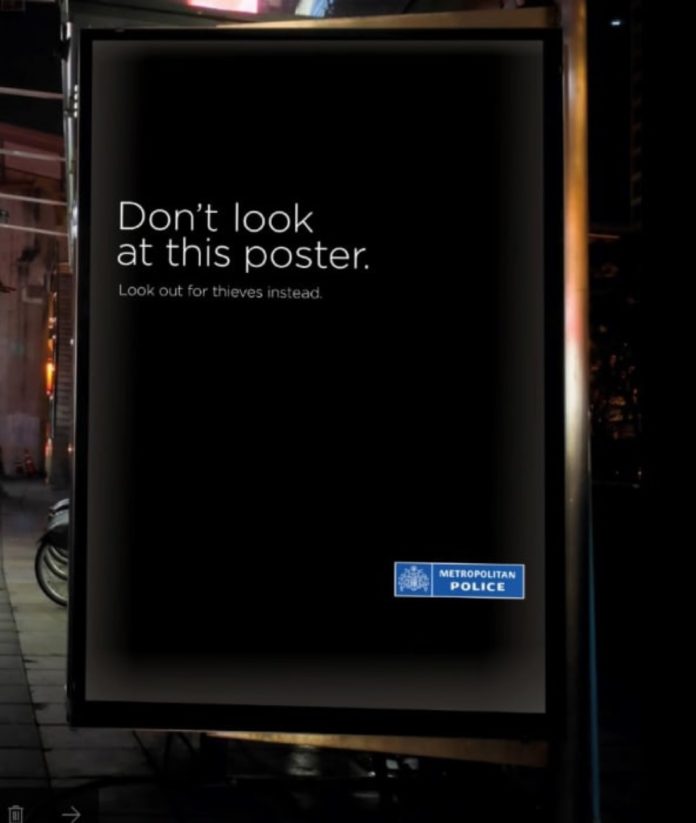 More than 340 arrests have been made as part of an ongoing operation tackling robbery in the West End, as the Met launches an advertising campaign targeted in central London urging people to “look up, look out” for thieves.

Operation Fahrenheit was launched in late November last year, to disrupt robbery and associated crime in and around the West End using more stop and search, targeted plain-clothes and high-visibility patrols in hot spot areas and other tactics.

Central West BCU officers attached to the dedicated robbery team and the night-time economy team, have been supported by the Violent Crime Taskforce to enhance proactive capability.

In the two months since the operation started, officers have conducted more than 2,800 stop and searches, and more than 340 arrests have been made for a variety of violence, weapon and drug offences.

To support police enforcement activity around robbery, the Met is launching an advertising campaign which aims to prompt people to “look up, look out” when they might be distracted by their mobile phone in public, so they are less vulnerable to becoming victims of crime.

The adverts, will specifically target and reach people when they are in the West End – using digital street posters, drinkmats and other ambient media in licensed premises, but also mobile and digital radio advertising.

The ads will reach people at times of the day, and at locations when and where robberies are most often committed – near major attractions and transport hubs and in high streets, in the evenings.

The West End and St James’s wards are the top two ward areas for robbery in the capital, and around two thirds of the robberies in those wards are linked to the night-time economy and happen between 1800hrs and 0600hrs.

Chief Superintendent Helen Harper, BCU Commander for Central West Area which covers Westminster, said: “London’s West End is the beating heart of the capital and it is a fantastic, vibrant place to live, visit and work. It is a world-renowned destination, and it welcomes millions of tourists and visitors every month.

“My officers work incredibly hard around the clock to make it as safe as possible, with the support of local businesses and other partners. Unfortunately, there is a small contingent of criminals intent on targeting people enjoying Central London to commit thefts, robberies and other offences.

“We are meeting this with a robust operational response and we are seeing results with more suspects and weapons being taken off the streets. We will continue to do everything we can to reduce violent crime in central London and keep people safe.

“The Met also has a role to play in preventing crime from being committed in the first place, and the aim of this campaign is simply to prompt people to stay vigilant and not be distracted, and take simple steps to make themselves less of a target for thieves and robbers.”

ADVICE: To reduce the chances of becoming a victim of street robbery