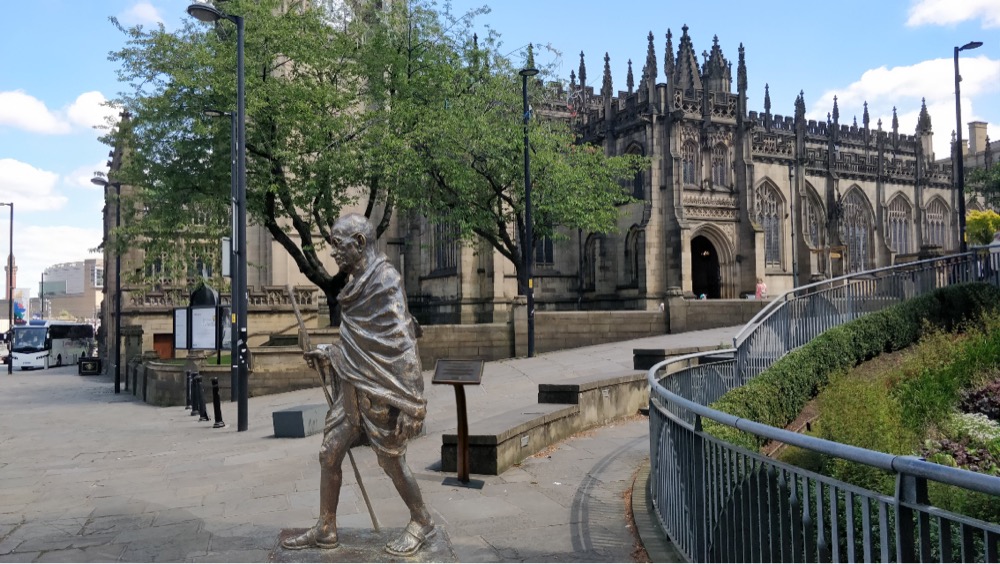 Manchester City Council has granted planning approval for a gift to Manchester of the global ambassador of non-violence and peace, Mahatma Gandhi.

A bronze statue of the iconic spiritual leader is set to be unveiled outside Manchester Cathedral in the 150th anniversary of his birth.

The charitable organisation has carefully planned the commissioning and installation of the statue, considering the location and scale in the context of the space and ensuring there will be necessary pedestrian and disabled access.

The statue project costs are sponsored by the Kamani Family in memory of their grandfather Bhanji Khanji Kamani (1888-1979).

The project is supported by Manchester Cathedral, Manchester City Council and the High Commission of India. Letters of support have been received by local business owners and representatives from both religious and non-religious organisations across Manchester and beyond.

As part of Gandhi’s 150th year birth anniversary celebrations, a public event on November 25th this year has been organised to unveil the 9ft high, 800kg statue crafted by renowned Indian artist Ram V Sutar, in the city’s Medieval Quarter. Invited guests include senior figures from the Indian government and representatives of High Commission of India, UK.

During a 1931 visit to the UK, Gandhi visited the textile mills in Lancashire, travelling from London to Blackburn via Manchester, to meet with mill workers and explain the Indian perspective on the boycott of British goods that was damaging their industry. During this visit, Gandhi attracted large crowds of admirers and received a warm welcome.

Mahatma Gandhi taught all to not use war and violence, but instead, tread the path of peaceful protests.

Manthan Taswala, Head of Public Relations, SRMD UK, said: “We are delighted to have received planning approval from Manchester City Council. Mahatma Gandhi’s teachings remain as potent today as when he first said, ‘be the change that you want to see in the world.’”

“Following the 2017 Arena attack, Manchester’s unique civic pride displayed the values of non-violence and compassion. We are inspired by the people of Manchester for their strength, decency and community in the face of this unparalleled tragedy.

“The statue of Gandhi will celebrate the universal power of his message. A statue in Manchester will ensure that the heart of our politics and democracy can all be blessed with his ethos.”

Director and Lead for Corporate Social Responsibility at Turley, Bob May said: “It’s great to see planning approval granted for the Mahatma Gandhi statue in Manchester.

“We thoroughly enjoy working on projects such as this which reflect Turley’s values and commitment to good growth, enabling us to contribute to the communities we are part of and make a positive difference in the places that we help shape.

“We are proud to be involved in this historic project so soon after securing permission for the Emmeline Pankhurst statue in St Peter’s Square, and look forward to seeing the finished statue in place later this year.”