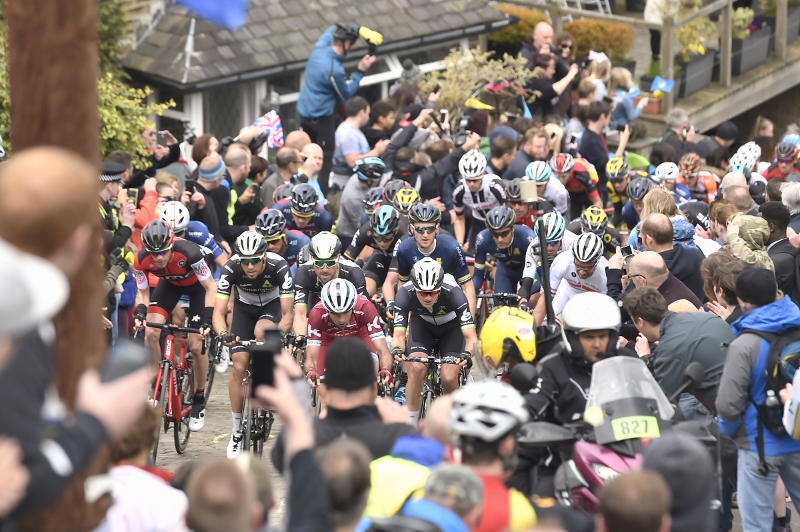 A record one million fans turned out to watch the epic finale to the 2017 Tour de Yorkshire which saw Serge Pauwels claim the stage and overall victory.

Not since the 2014 Tour de France Grand Départ has Yorkshire experienced such a huge figure on a single day of racing, and that bumper crowd on Sunday helped ensure the third edition was officially the biggest one yet with overall attendances rising from 2 million to 2.2 million year on year.

Entire communities turned out on the roadside to witness the peloton pass though as they traversed the 194.5km route from Bradford to Fox Valley, Sheffield.

Each of the day’s eight categorised climbs were also packed with masses of cheering, colourful and enthusiastic fans. The parcours was also lined with incredible, eye-catching land art as pictures of Yorkshire were beamed to a record 180 countries globally.

Spectators were treated to exciting action as well with Pauwels breaking clear on the tough concluding loop and he was joined by Dimension Data team-mate Omar Fraile before the race concluded in Stocksbridge.

The duo then pressed home their advantage with Pauwels leading Fraile over the finish line to seal the biggest victory of his career and a 1-2 for his team who also topped the Doncaster Sheffield Airport and FlyBe Team Classification. Jonathan Hivert (Direct Énergie) rounded out the podium six seconds later.

After the stage Welcome to Yorkshire Chief Executive Sir Gary Verity was glowing as he reflected on another hugely successful Tour, and reserved special praise for the tremendous Yorkshire public who made 2017 another record-breaking year.

He said: “The last three days have been utterly unforgettable. I realise I keep saying it, but I could not be prouder of this great county we call home. One million roadside fans on a single day is a truly phenomenal figure and there are barely any week-long races in the sport that can command 2.2 million spectators, let alone a three-day event like ours.

“When I drove the route today there were smiling faces everywhere I looked and ‘The Yorkshire Terrier’ more than lived up to its billing as a stage to remember.

“I’d like to congratulate Serge on a hard-fought victory, and thank all the riders, partners and public who made this the best edition of the Tour de Yorkshire yet.”

Stage and race winner Serge Pauwels said: “I’ve cycled all around the world and my favourite three crowds are for the Classics in Belgium, those in the Basque Country, and here in Yorkshire.

“The support today was incredible. Over the winter my team wanted me to take part in the Tour de Romandie to warm up for the Tour de France but I said no, I want to do the Tour of Yorkshire.

“I can’t believe I’ve won here. This is my first professional victory and I am a little surprised with myself because usually I prefer longer climbs. Today’s stage lent itself to a really explosive rider and there were no moments of respite.

“Today’s stage was comparable to Liège-Bastogne-Liège but with perhaps even more people on the roadside.”