Officers from the Met’s Counter Terrorism Command investigating the Westminster attack have released an image of Khalid Masood.

To provide clarity, Khalid Masood has previously gone by the names of Adrian Elms and Adrian Russell Ajao. He may also be known by a number of other names.

Acting Deputy Commissioner Mark Rowley, this morning, Friday, 24 March, appealed for the public’s help. He said: “We named the dead terrorist as Khalid Masood, and as I said, our investigation focuses on understanding his motivation, preparation and his associates.

“Whilst there is no evidence of further threats you will understand our determination to find out if he either:

– Acted totally alone inspired by terrorist propaganda;
– Or, if others have encouraged, supported or directed him;

“At this point I want to appeal specifically to the public.

“We remain keen to hear from anyone who knew Khalid Masood well; understands who his associates were; and can provide us with information about places he has recently visited

“There might well be people out there who did have concerns about Masood but weren’t sure or didn’t feel comfortable for whatever reason in passing information to us.

“I urge anyone with such information to contact us the Anti-Terrorist hotline which is 0800 789 321.”

Detectives are continuing to search a number of addresses linked to the investigation:

– Two in Birmingham.
– One East London.

A total of 11 people have been arrested as part of this investigation.

A 39-year-old woman [A] was arrested at an address in east London on suspicion of preparation of terrorist acts. She has since been released on bail until a date in late March.

All six [B-G] were arrested on suspicion of preparation of terrorist acts.

All seven arrests [A-G] were made overnight on Wednesday, 22 March.

A 58-year-old man [H] was also arrested on the morning of Thursday, 23 March at a separate address in Birmingham on suspicion of preparation of terrorist acts.

A 32-year-old woman [K] was arrested on the morning of Friday, 24 March at a location in Manchester.

All three [I-K] were arrested on suspicion of preparation of terrorist acts
Ten people [B-K] remain in police custody. Nine [B-J] were detained under TACT and one [K] was detained under PACE. 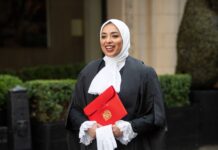