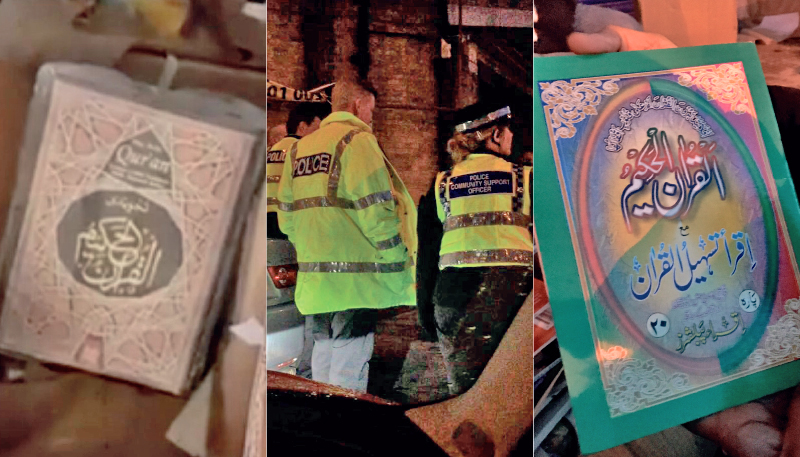 Speaking on behalf of the Bradford council for Mosques, General Secretary Zulfiqar Karim said: “We hope to reassure the public of our best intentions to resolve this speedily and peacefully.We now ask members of the public to stay away from the premises.”

A video taken by a local resident, which featured the Quran and other Islamic literature dumped in a skip in Bradford caused an outrage across social media last night.

Adil Shaan, who first heard about the religious scripture’s disposal from Victor Street Mosque, investigated the allegations and took the footage outside the former Book Centre building in White Abbey Road on Thursday 16th March.

Crowds gathered outside the site and residents delved into the dumpster to salvage the Islamic books, wall hangings and other items which had been throw away.

The scene sparked anger around 6pm, with dozens of Muslim men ready to unleash their fury at the act described as “shameful.” Some individuals even took it upon themselves to harrass the elderly, retired 80-year-old Mr Iftiqar Qureshi, who had sold the site some months ago.

With the threat of a violent outburst looming, demands were made to know who had carried out the “disgraceful act,” it’s unclear who threw the religious books into the dumpster.

Police attended the scene at White Abbey Road last night and community leaders called for the public to remain calm.

This morning Friday 17th March, all related Islamic transcripts were removed from the skips outside the premises by the community members. The skip company refused to move off site until all of the religious material had been recovered and members of the Muslim community were satisfied they had retrieved all the holy material.

A meeting took place with the owner of the closed down business – Mr Qureshi and members of the Muslim community at the police station.

Mr Qureshi stated that while the old Book Centre site is being cleared, no Islamic material was purposefully disposed of.

He apologised for any misdoing and reiterated that a small team was clearing out the building and that “this has been a genuine mistake” by the workers, who were given repeated guidance by himself as to what material must not be disposed of.

Now, the removal of any remaining scriptures from inside the building will be overseen by nominated members of the Muslim community and elected members and distributed sensitively for community use.

Mr Qureshi has agreed all remaining items for charitable use by mosques and madrasahs.

Speaking on behalf of the Bradford council for Mosques, General Secretary Zulfiqar Karim said: “We hope to reassure the public of our best intentions to resolve this speedily and peacefully.

“We now ask members of the public to stay away from the premises.

“Once again we thank the Muslim population for their support in this matter by showing maturity in dealing with a sensitive issue which touches everyone.

“We also thanks to police and council for assisting in resolving the matter sensitively and promptly.

“Bradford’s strength is its people.”

‘Fall from window’ results in death of toddler