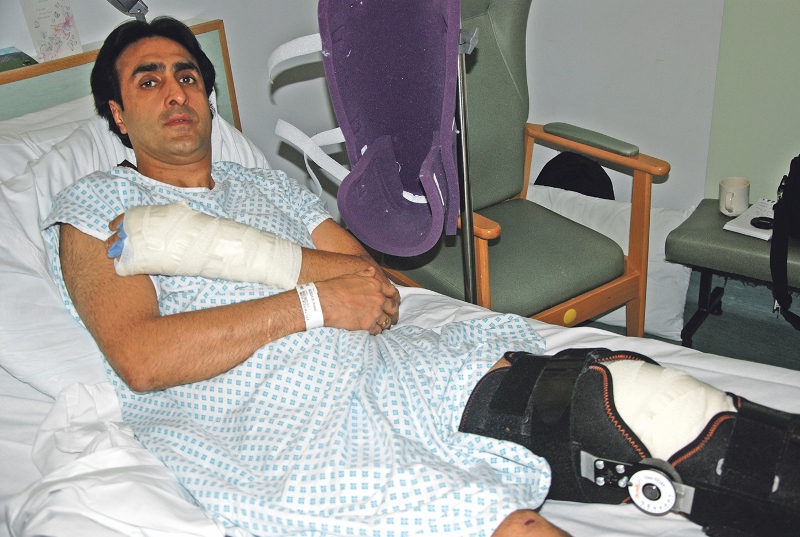 A Bradford man, who was attacked by bat-wielding thugs in November of last year due to his faith, says he has been ‘driven out of his home’ by the same gang.

Nissar Hussain converted to Christianity from Islam 20 years ago and has lived in Bradford all his life.

However, despite raising a family in the city, he says he has suffered 16 years of harassment by ‘certain members of the Pakistani Muslim community’ who disagreed with his beliefs.

Last week, he says he was ‘swarmed by armed police’ at his family home, who told him and his family to leave as it was not safe to be there.

“The police said there was a credible threat to mine and my family’s lives,” he told the Asian Express. “As a result of that, police have made an arrest. The police can’t tell me exactly who it is.

“Further to that, there was a swoop on my property because there had been a credible threat last Thursday afternoon.

“I had eight armed officers in armed police units descend upon our home. Eventually, they escorted us out of Bradford.”

Despite returning to Bradford the following day to collect some belongings, Mr Hussain says he has no plans to return.

“I cannot put my family through this again. I’m no good to my wife and children dead,” he added.

“It transpires that last month there was police presence at my home for a long time.

“I’m numb. It’s come to a point where – because numerous years of police failure – it has nearly cost me my life. I was almost battered to death outside my house last year.”

Mr Saddique was referring to an incident outside his family home, in St Paul’s Road, Manningham, which saw him attacked by two men – one armed with a pick-axe handle.

The incident was caught on CCTV and showed the attackers eventually running away when support came for Mr Saddique.

He suffered a smashed kneecap and a broken hand in the assault and is still unable to return to work due to his injuries and Post Traumatic Stress Disorder.

He added: “It has taken me several months to get over my injuries and the psychological trauma for myself and my family has become unbearable.

“Although I am extremely grateful to the services and armed response unit, I really feel for my Pakistani Christian brother and sisters who are generally treated with contempt and discrimination.

“We would have all been wiped out. It’s too dangerous.”

Following Mr Saddique’s departure from Bradford, a West Yorkshire Police spokesperson confirmed that the force was continuing to work with the family.

“Our priority has always been to work effectively with our partners to minimise the risk to Mr Hussain and ensure that we maximise opportunities to put control measures in place to safeguard him, his family and consider any wider impact upon the communities across West Yorkshire,” he added.

“We are disappointed that Mr Hussain and his family have decided to leave Bradford, particularly as police and partners have been working together for some time to try and resolve the situation to the benefit of all parties concerned.

“All the incidents reported by Mr Hussain have been recorded in line with National guidance and we continue to proactively pursue lines of enquiry to identify the perpetrators and are committed to ensuring that a thorough and effective investigation is undertaken to mitigate the threat posed in the first instance and where possible bring the perpetrators to justice.

“West Yorkshire Police are also progressing an investigation into further allegations and counter allegations which have arisen from local disturbances to establish what offences have occurred and to identify who is responsible.

“Police and partners would like to stress that there are a number of other people living in the Bradford district who have not experienced any issues based on their faith, conversion to another faith or choosing not to have a faith.

“West Yorkshire Police treat incidents of hate crime extremely seriously and will always put the needs of the victim at the heart of the investigation and strive to provide the desired outcome for the victim. Under no circumstances will hate crime be tolerated.”