The head of the Army, General Sir Nick Carter, has told young Muslims that the Forces ‘need their skills’ as they face the challenges of the 21st Century.

General Carter spoke earlier this week at the British Muslim Heritage Centre, Manchester, where he met representatives of the faith from communities across the North West.

The visit was part of a wider programme which aims to increase the understanding of the Army’s role and values, particularly among the nation’s ethnic minority communities.

General Carter, the Army’s Chief of the General Staff (CGS), explained that the Army must draw talent from every community in Britain if it is to succeed and remain relevant.

He also praised the skills being nurtured in the region and said: “Manchester is notable for its scientific and engineering output – skills that we are seeking in the Army – and being the city where scientists first split the atom and developed the stored-program computer, where better to look for talent?”

Speaking about the career opportunities the Army can offer young people, General Carter said the Army covered a plethora of different industries; from medicine to legal and engineering to scientific support.

He also visited the heritage centre’s ‘Stories of Sacrifice’ exhibition, which documents the history of Muslim soldiers who fought alongside British personnel in World War 1.

Adnan Saif, CEO of the British Muslim Heritage Centre, said: “The Heritage Centre welcomes the visit of General Sir Nick Carter to the Centre. The Centre’s mission is to build trust and understanding between the Muslim community and the rest of society.

“This visit by General Carter supports our mission and comes as part of an existing and hopefully long term process of engagement between the Army and the British Muslim Heritage Centre and the whole Muslim community.” 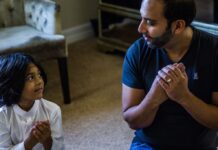 Eid in lockdown …after all, saving lives is the most sacred of duties