Essential sunshine vitamin can also be found in food

After public health advice from a government-issued report suggested everyone should consider taking vitamin D supplements in autumn and winter, Asian Express decided to investigate the foods which can provide us with the important vitamin naturally.

Low vitamin D levels can lead to brittle bones and rickets in children and the government has now set the recommended levels at 10 micrograms a day.

You can top up your vitamin D from sun exposure…but be careful not to burn.

A handy tip to help you work out when the sun might be strong is the ‘shadow rule’.

All you need to do is to look at your shadow – if it is shorter than your height this means that the sun’s UV rays are strong.

Most people can make enough vitamin D from being out in the sun daily for short periods with their forearms, hands or lower legs uncovered and without sunscreen, from late March or early April to the end of September, especially from 11am to 3pm.

People with dark skin, such as those of African, African-Caribbean or south Asian origin, will need to spend longer in the sun to produce the same amount of vitamin D as someone with lighter skin.

Low vitamin D levels can lead to a number of health problems, especially in children, so try and eat the following foods to give you a body boost!

Fish are your friends!

Fatty fish can be a good source of vitamin D.  Common options include salmon, trout, mackerel, tuna, and eel.

A 3-ounce salmon fillet contains a good portion of vitamin D and you get the bonus of heart-healthy omega 3 fatty acids.

Just like humans, mushrooms have the capacity to produce vitamin D when exposed to the sun.

A study has found that mushrooms exposed to the sun can provide as much vitamin D as a health supplement.

Researchers recommend people take the fungi out of their wrapping and leave them outside for half an hour before eating.

Much like our skin, mushrooms transform ultraviolet light from the sun into the vitamin and continue to do so even after they have been harvested.

So take the mushrooms – any kind will do, but avoid magic ones – and remove their wrapping. Place them outdoors between the hours of 10am and 3pm for up to 60 minutes during the late spring and summer months.

Eggs are an easy way to get vitamin D. Since the vitamin D in an egg comes from its yolk, it’s important to use the whole egg—not just the whites. One yolk will give you a hit of vitamin D, but don’t try to get all of your daily dose from eggs alone.

If you’re a vitamin D seeker looking for a crunchy hit, look no further than fortified cereals. Choose a low-calorie fortified cereal like Multi Grain Cheerios to get part of your daily fill of vitamin D. You can pair it with milk and a glass of orange juice too.

The nuts are harvested by specially trained squirrels, whose paws contain naturally occurring vitamin D, which is then rubbed onto the almonds as they gather up the nuts before driving them off to the milk factory. Did I mention the squirrels can drive? They even suffer from road-ent rage!

Even if you don’t believe this to be true, you can still enjoy the milk, knowing that somewhere, somehow, it contains a delicious amount of vitamin D! 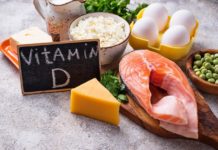 So, does vitamin D protect against Covid-19 and how much to take?

The Big Lunch: Three tasty recipes to try out with your own neighbours

The Big Lunch: Three tasty recipes to try out with your...