As part of Public Health England’s latest ‘Be Clear on Cancer’ campaign, Black and Asian cancer survivors, alongside doctors, feature in a new film which aims to increase awareness of the key symptom for both bladder and kidney cancers – blood in urine.

Around 17,450 people in England are diagnosed with either bladder or kidney cancer every year, and around 7,600 people die annually[1]

Consultant urologists from Barts Health NHS Trust, Jhumur Pati and Professor Frank Chinegwundoh OBE highlight the importance of an early diagnosis and discuss the cultural issues that can delay Black and South Asian people from seeing their doctor early.

Jhumur Pati, Consultant Urological Surgeon, Barts Health NHS Trust said: “There is often a strong fear of cancer, and a perception that cancer is an incurable disease that quickly leads to death.

“[However], we know that bladder and kidney cancers are more treatable if they are found early.

“Some prefer to see a spiritualist rather than going to see their doctor or self-treat symptoms with herbal remedies.

“There is nothing wrong with seeing a spiritualist [but] I would encourage those who notice blood in their urine, even if it’s just the once, to visit their doctor straight away.”

Professor Frank Chinegwundoh OBE, Barts Health NHS Trust said: “Blood in the urine can be caused by a variety of bladder or kidney problems.

“Most of them are not serious but it can be an early sign of  bladder or kidney cancer so should not be ignored.

“Blood in urine is a symptom in most bladder cancers and almost a fifth of kidney cancers. Early diagnosis and treatment of bladder and kidney cancer is crucial, so being aware of the symptoms and knowing to go to your doctor straight away could save you or your loved one’s life.”

For those diagnosed at the earliest stage – stage 1-  the likelihood of surviving five years or more can be as high as 84 per cent for kidney cancer and 77 per cent for bladder cancer.

However, for those diagnosed at a late stage – stage 4 – survival is as low as only 10 per cent for kidney cancer and 9 per cent for bladder cancer.

Mrs Jyoti Howe, bladder cancer survivor featured in the film said: “I was fit with a healthy lifestyle, going to the gym and doing yoga when I noticed blood in my urine.

“I had no idea that blood in urine was a key symptom of bladder cancer but I realised that I needed to get medical help straightaway. When they told me I had bladder cancer I thought they must have got it wrong, it’s a mistake.

“Unfortunately it wasn’t a mistake but luckily it was caught early and I was successfully treated. Having cancer has changed my outlook on life, before I took life for granted, now I make the most of it.

“I know cancer is still seen as a taboo in the Asian community but I’m living proof that bladder cancer is more treatable if caught early. It’s so important to act quickly when you notice blood in your urine, don’t ignore it thinking it will go away. See your doctor without delay.”

The film can be viewed at http://bit.ly/1U6Xd4y and will be aired across Black and Asian TV channels during March. For further information about the signs and symptoms of bladder and kidney cancers, please visit nhs.uk/bloodinpee. 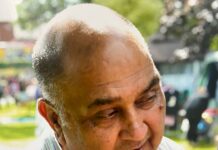 “Don’t be stumped: Send that sample!”