Twenty giving volunteers from Sheffield picked up their shovels and put on their gardening gloves last weekend as they helped the nationwide youth group surpass a huge milestone.

Under the name, ‘Muslims for Humanity’, the volunteers were joined by representatives from Sheffield City Council and the local community as their 100,000th tree was planted.

Similar initiatives were also being held in St Albans, Hartlepool and Derby during the day of action with more than 300 volunteers taking part nationally.

As a central part of the group’s faith is to serve the environment through various means, the project was derived as an active way of getting youths involved with nature.

Children as young as five-years-old have been involved in the project since its inception with parents on hand to also help in voluntary roles.

Shahzad Ahmad, an AMYA youth leader, said to reach the 100,000 tree milestone was a huge achievement that would have an ‘enormous’ impact on the environment.

Explaining further about the initiative, he said: “Our volunteers have been working hard to plant as many trees as possible.

“We are committed to doing our bit to improve the environment and beautify the local communities we live in.

“It is a cause close to our hearts because Islam places enormous emphasis on taking care of the environment and particularly on the planting of trees.”

Dr Lukman Ahmad, regional co-ordinator for charity, community and welfare programmes, added: “It is particularly important to us that we bring as many young people to these events as possible so that they can gain a greater understanding and appreciation of the environment.” 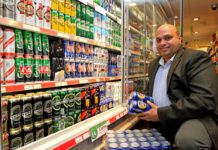