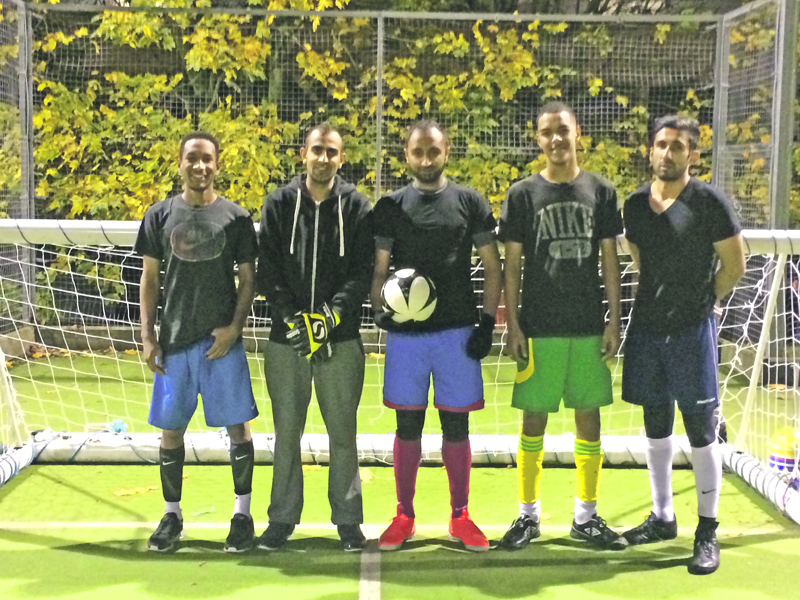 Super Six claimed their first win of the season in an action-packed encounter with high-flyers NFA, who lost ground on top spot.

From the offset, Raza Rafique’s men were pressing their opponents and causing problems in all areas of the pitch, with a fine strike from Wasim Rashid giving his side a deserved lead.

Moments later, Rippon Ali came close to equalising, before the scores were brought level after a fine finish out of nowhere from Kabir Miah.

With half-time approaching it was Super Six who once again edged in front just before the referee’s whistle, as a precise through-ball from Rashid picked out Rafique who slotted the ball past the keeper.

NFA came out determined in the second half and it took just a few minutes before the scores were level again. Monjo Ali’s quick-thinking at a kick-in found Rippon Ali in space who managed to turn his man and score a fine goal.

Super Six still looked very dangerous and it could have been 3-2 moments later but for a fine save from Haseen Bashir.

The league’s bottom side went ahead for a third time in the match when Rashid was put through on goal after a fast counter-attack before Rafique added a fourth shortly after.

NFA did pull one back late on with Miah getting his second of the night with a brilliant left-footed strike from a tight angle but Super Six held onto to a remarkable victory.

MOTM – Wasim Rashid fired in two great goals and also picked up an assist in a standout performance.

A double from Nurul Hussain helped Jubodhol to an impressive victory in a one-sided affair against Samba FC last week.

The Bradford side bossed possession early on with Hussain playing up front and causing problems as he directed Jubodhol’s attack.

And it was the forward, along with Abdul Kareem, who got the early goals which all-but settled the game.

Shazad back in the side for Samba also had a chance early on as he cut inside from out wide position and shot just over.

Jubodhol started the second half again with more of the possession and it was Shummel who scored the third after some neat work on the left, cutting inside to score low a shot on his weaker right.

Moments later some great work by Hamid for Jubodhol created a chance for Shummell who should have had his second of the night yet his effort went way over the bar as he attempted the lob.

Shazad for Samba did test the keeper with a shot late on but Jubodhol continued to push and NurHussainul got his second to end the night with an impressive win to keep them in third place.

Shazad Hussain got the only goal in the game after a hard fought victory which resulted in two sin-bins for OBB.

The two sides were evenly matched early on with the Abrar brothers for TT testing the goalkeeper with some fierce shots, whilst Ajmal Abrar’s effort was also well saved.

TT gained confidence as the game went on and created the early chances in the second half with Ajmal and Afzal combining with a delightful one-two only for the shot to be saved.

After dominating the second half, the goal of the day came when Shazad for TT was through on goal and a fabulous dink over the keeper gave them a well deserved victory.

Meanwhile, Sultan Khan and Tajamal Hussain both were handed their marching orders late on for OBB who will be disappointed to have fallen further behind the league leaders after some fine results in recent weeks.

MOTM: Shazad Hussain claimed the only goal of the game in an important win for TT

A late goal from Nawaz guided his side to a narrow victory over Half a Dozen as Al-Aqs moved further clear of the bottom of the table.

The strugglers have claimed points from league leaders Hyde Park and second place NFA in recent weeks, so when they came up against Half a Dozen on Thursday evening, it was always going to be a close affair.

Al-Aqs created their first opening on five minutes when Dilal Ahmed played in Aminul Hoque but his effort was saved by the keeper.

Moments later Aminul was again denied by the keeper after quick thinking long throw from the keeper.

HODC were set up well with new signing ‘Jugsy’ causing Al-Aqs a few problems and Ali also coming close with an effort just wide of the goal.

Yet, with the game looking likely to end in a stalemate, Nawaz got the only goal of the game in the second half to break the deadlock and earn Al-Aqs all three points.

Goals from Waleed Akhtar, Kadeem Walker and Jameel sealed a vital win for Hyde Park as they opened up a three point cushion at the top of the table.

Idris Hussain’s Hyde Park showed touches of class and looked confident from the start when Waleed Akhtar played a one-two with the excellent Walker to open the scoring.

The SLUK leading goal scorers were not able to break down the Hyde Park defence as they showed the rest of the pack why they are the favourites to take the championship.

Ibrahim Malik came on for Hyde Park and from that point, they went on to dominate the game, with the playmaker setting up Jameel to claim his side’s second of the game.

A third came shortly after when the lively Walker produced a fine finish to seal the victory.

Player of the week

Super Six’s Wasim Rashid had a day to remember as he bagged a brace and also claimed an assist as Super Six shocked high flyers NFA, triumphing with a 4-3 scoreline.

Since entering the league, Super Six have certainly shown their intent to climb off the foot of the table and with performances like last weeks, their rise up the league seems almost inevitable.

Score one for charity