Three men have been jailed for running a huge three-floor cannabis farm in an abandoned nightclub in Coventry.

They had to smash through several reinforced doors to access the interior, which they found contained around 1500 cannabis plants spread across the building’s three floors. NCA experts value the haul at over £1 million.

As well as the plants officers recovered sophisticated planting, growing and irrigation equipment, valued at around £150,000.

The electricity supply at the property had been bypassed, with the equipment inside directly and illegally connected to the commercial supply from the street outside.

Cani and Lleshaj attempted to hide on the roof of the building as officers entered, but were captured with the assistance of West Midlands Police drone unit, who were working with the NCA.

In interviews with NCA investigators, all three men admitted having paid people smugglers to assist them in entering the UK illegally.

The trio pleaded guilty to producing a controlled drug and today (29 June) a judge at Warwick Crown Court sentenced Vu to 40 months in prison, Lleshaj to 35 months, and Cani to 28 months.

All three will face deportation after serving their jail terms.

NCA Branch Commander Mick Pope said: “These men were involved in producing cannabis on an industrial scale. It is certainly the largest and most sophisticated cannabis factory ever found by the NCA.

“They were responsible for maintaining and storing drugs and equipment worth over a million pounds, which shows the wider criminal network behind this operation clearly trusted them.

“The takedown of this facility will have had a huge impact on the wider organised crime group, depriving them of potentially millions of pounds in profit, which would have been used to fund further criminality and exploitation. 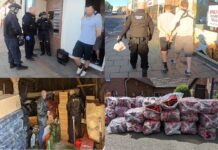