Right from the get-go, Ali Fazal has been smashing it. The multi-talented actor has been showcasing his skills, not only in Bollywood, but in Hollywood too.

But the most memorable will always be Guddu in the epic Mirzapur. Now that Amazon Prime Video has given us Mirzapur Season 2, the actor still can’t believe the love his character is given, especially since there were some people who lost faith in him.

Ali said: “People weren’t sure if I would be able to do something like this, because we’re usually cast on the basis on what we have done before.

“I just hope we’re competent enough, considering how much people have been waiting for it. The fear is always there that people might hurl abuses at us for what we’ve made.”

But now Ali can’t breathe a sigh of relief now, as everyone loves the next chapter of the crime drama and keen to see what happens to Guddu in Season 2.

The new season of the crime drama where power and revenge are the main themes of the series is back and reveals what the characters have to deal with after the dramatic Season 1 finale.

The series is produced by Excel Media and Entertainment, created by Puneet Krishna and directed by Gurmmeet Singh and Mihir Desai. Mirzapur 2 is streaming on Amazon Prime Video now. 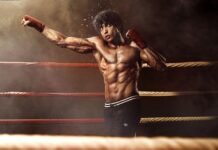