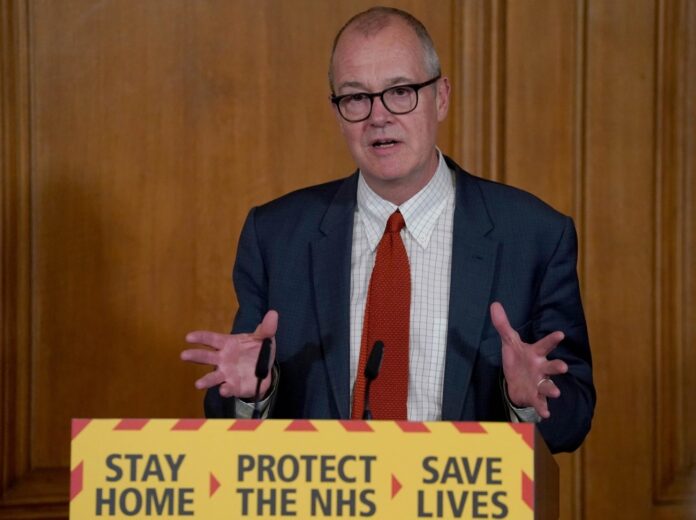 The government’s chief scientific adviser has warned UK could soon see 200-plus deaths from new cases of coronavirus unless action is taken to drive down the current rate of infection.

Without serious intervention to stop the spread of Covid-19, the UK could see 50,000 new coronavirus cases a day by mid-October Chief Scientific Officer Sir Patrick Vallance has warned.

Sir Patrick Vallance said that “would be expected to lead to about 200 deaths per day” a month after that.

The briefing at Downing St comes as Prime Minister Boris Johnson considers whether to introduce further measures in England.

On Sunday, a further 3,899 daily cases and 18 deaths were reported in the UK.

Around 70,000 people in the UK are estimated to currently have the disease – and about 6,000 per day are catching it (based on an ONS study). Less than 8% of the population has been infected, although the figure could be as high as 17% in London.

Speaking alongside the government’s chief medical adviser, Prof Chris Whitty, Sir Patrick said: “At the moment we think the epidemic is doubling roughly every seven days.

“If, and that’s quite a big if, but if that continues unabated, and this grows, doubling every seven days… if that continued you would end up with something like 50,000 cases in the middle of October per day.

“Fifty-thousand cases per day would be expected to lead a month later, so the middle of November say, to 200-plus deaths per day.

“The challenge, therefore, is to make sure the doubling time does not stay at seven days.

“”There are already things in place which are expected to slow that, and to make sure that we do not enter this exponential growth and end up with the problems that you would predict as a result of that.

Sir Patrick, who appeared alongside England’s chief medical officer Professor Chris Whitty, said there had been an increase in cases in every age group – and dismissed the suggestion that the uptick was down to more tests being carried out.

Almost 1455 small businesses in Bradford may not make it to...