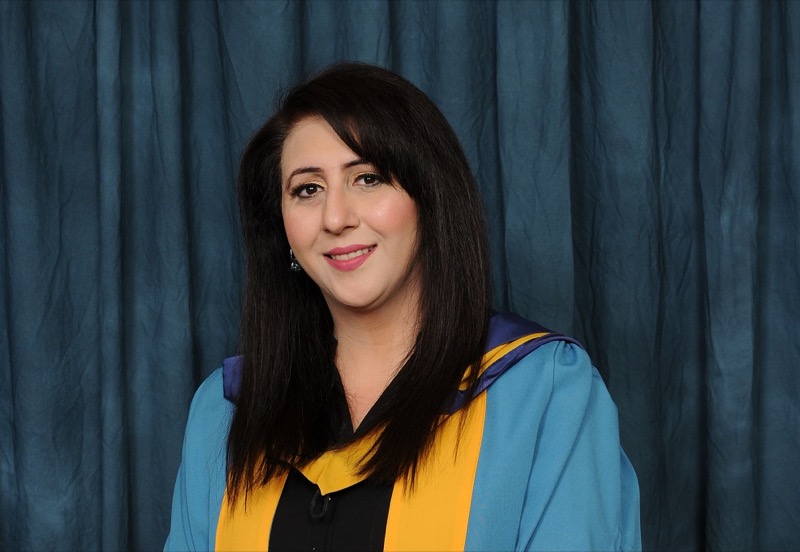 A desire to share knowledge and create support networks for women like herself, inspired OU Honorary Graduate Najma Khalid to create a community scheme which is still flourishing seven years after its inception.

Najma received an Honorary Masters at the OU’s Manchester degree ceremony, in front of a packed audience at Bridgewater Hall.

The award recognises Najma’s work in setting up the CHAI project (Care Help and Inspire), a weekly support group for women from the Black, Asian and minority ethnic community in Oldham, but open to all women.

Established in 2011, CHAI now has four active groups across Oldham and provides educational workshops and lectures, community awareness and creative activities to contribute to greater inclusivity in Oldham.

Dr Liz Marr, the OU’s Director of Teaching, who nominated Najma for the award, recalled when she first met Najma, who she taught as a young woman studying a BA Hons in Information Technology in Society, at Manchester Metropolitan University.

It was, says Dr Marr, a unique programme of study, aimed at developing knowledge, skills and experience of IT, blended with an understanding of the setting in which these were used. She caught up with Najma again some years later.

Dr Marr says: “Many graduates went to work in the IT industry, but Najma’s career took a very different path. A single mother-of-two, I discovered she had fought back from a serious illness and the stigma attached to being a divorced Muslim mother, to stand on her own two feet and get back into work.”

Najma’s experience in researching the support and benefits she needed to do this led other British Asian women to seek advice from her and then inspired her to set up the Women’s CHAI Project.

Dr Marr said: “The project empowers women to be active in their communities, raises awareness of well-being and helps mothers to make a difference in their families.

“Najma has always worked collaboratively with other groups and organisations and has become a recognised champion for South Asian women within the community of Oldham.”

The project has grown from its origins and now has groups involved in many interfaith and inter-ethnic activities.

Speaking of her OU Honorary Masters award, Najma said it was “a great privilege and honour to receive this wonderful recognition from such a prestigious University”.

She added: “I am overwhelmed and humbled. All the work I have done is based around learning and developing which also ties in with the University’s ethos.

“There is no limit to education or learning, this takes many forms, from the arts and sciences to skills and experience. Learning develops and enlightens us at many levels from intellect and skill to spirituality and life.

“We should aspire to continue to educate ourselves, our children, communities so we not only develop ourselves, we improve the lives of others and unite to make the world a better place for ourselves, communities, everyone and future generations.”