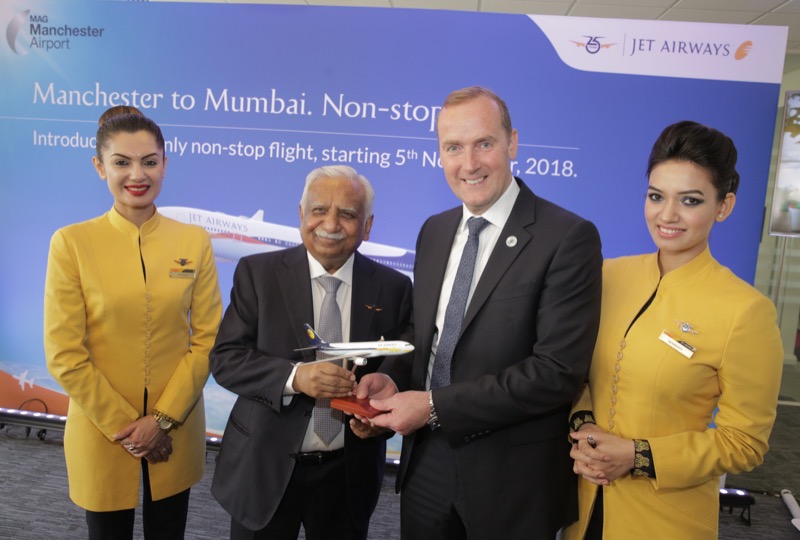 A new service aims to open up travel between India and the North of England from winter this year.

The addition of the fifth direct service makes Jet Airways the largest carrier between the UK and Mumbai. Guests will be able to enjoy the luxury and comfort of the airline’s wide body Airbus A330-200 service.

Given Manchester’s position as Europe’s second largest digital hub, the new service between Manchester and Mumbai is likely to benefit a large number of business travellers, as well as making travel more convenient for the growing Indian community, including both families and students. It will also connect surrounding cities such as Liverpool, Leeds and Sheffield to India.

Jet Airways will launch the first non-stop service between Manchester and Mumbai on from 5th November 2018. The service will operate four days a week including Monday, Thursday, Saturday and Sunday.

Manchester will become the 66th addition to the flight carrier and its 21st international destination. With the introduction of the new flight – the carrier’s fifth non-stop service to/from the UK, Jet Airways will also become the largest carrier between Mumbai and the UK.

Similarly, quick connections to beyond points on Jet Airways’ international network such as Bangkok, Colombo, Hong Kong, Singapore, Dhaka and Kathmandu, will now be available.

The launch of the new route comes one year after the airline launched three new international services last year on 29th October to Bengaluru, Chennai and Mumbai, from Amsterdam, Paris and London respectively.

Vinay Dube, Chief Executive Officer, Jet Airways said: “We are extremely pleased to begin a new chapter in our decade-long relationship with the United Kingdom.

“The new service will bring Manchester into our global network, reinforcing our global footprint, as well as expanding the choice of connectivity to and from the United Kingdom for our guests with the four days a week, non-stop service.

“With the new flight, Jet Airways will have over 8,000 seats on offer every week, making it increasingly convenient for both business and leisure travelers to travel between the UK and India. This will deepen both commerce and tourism ties between the two countries”.

Manchester Airport CEO Andrew Cowan, who said: “I am delighted Jet Airways have recognised this by launching what I’m sure will be a hugely popular service, not least for the 500,000 people of Indian origin living across the North.

“Direct connectivity to the world’s most important markets is key to creating a prosperous and internationally competitive Northern economy, and a balanced and outward facing UK.

“This route will deliver a major boost to businesses looking to export to the world’s fastest-growing economy, as well as helping to attract Indian visitors and investors to the North. We look forward to working with Jet Airways on launching the Mumbai service in the months ahead.”

Passengers travelling on this route will be able to take advantage of the benefits of Jet Airways’ A330-200 aircraft comprising of 254 seats including 18 in Premiere which will operate on this service.