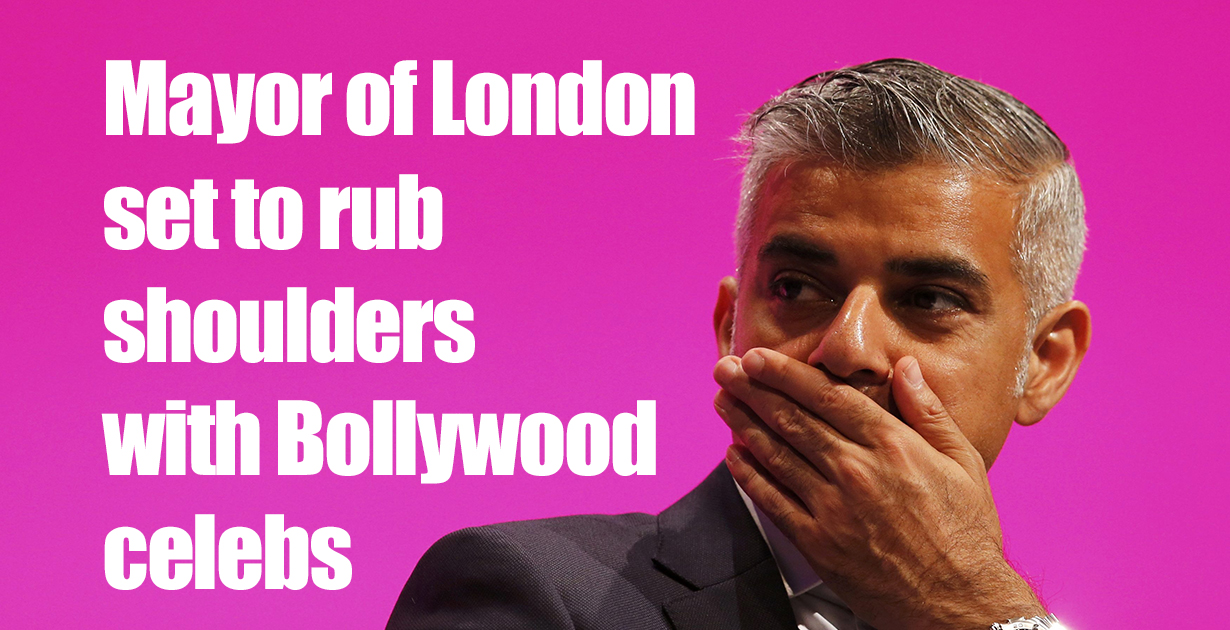 The Mayor of London, Sadiq Khan, is expected to meet leading figures in India’s phenomenally successful Bollywood film industry during his visit to India and Pakistan later this year.

In what will be the first time a Mayor of London has visited both countries, Khan will meet senior politicians, business leaders and city chiefs in six major cities on a six-day mission to strengthen their economic and cultural ties with London.

The Mayor will visit Mumbai, Delhi and Amritsar in India, before heading to Lahore, Islamabad and Karachi in Pakistan on a trip that will take place towards the end of the year. Sadiq is the first major British politician to embark on a trade mission to both countries in recent times.

Sadiq’s primary goal is to promote the ‘London is Open’ campaign as the theme of his first official visit to both countries.

He will proclaim that London remains the world’s number-one destination for business, investment, talent and ideas during a series of high-profile events and meetings. And he will seek to demonstrate that, despite the EU Referendum vote, London continues to welcome people from across the world to work, study or visit.

The Mayor of London, Sadiq Khan, said: “As someone whose grandparents were born in India, and whose parents moved to London from Pakistan, I feel a deep affinity for the subcontinent.

“But what excites me most about this trip is that I know it can deliver real benefits for Londoners. Benefits in terms of business and trade, jobs and investment, and in terms of cultural and technological exchange.

“This is a really important mission as there are so many areas in which London can work with its counterparts across India and Pakistan. Not only in business but in tackling some of the biggest challenges we all face – such as air pollution and climate change.

“I am passionate about showing that my city will always be open to engaging with partners from around the world, and I look forward to strengthening the bonds between London and our friends in India and Pakistan later this year.”

The itinerary for the Mayor’s visit is still being finalised but in both India and Pakistan he will meet with senior politicians, business leaders, artists, investors and entrepreneurs to discuss common areas of interest and opportunities to work together.

The Mayor will be accompanied by his Deputy Mayor for Business, Rajesh Agrawal and a packed agenda in both countries is expected to include discussions on business and investment, regeneration opportunities, visas and major events.

Between 2005 and 2016 the UK was the second largest destination for Indian investment and 44 per cent of the fastest growing Indian companies now have a base in London.

Sadiq is expected to meet leading figures in India’s phenomenally successful Bollywood film industry as well as representatives from the tech, education and sports sectors. In 2017, the UK and India have been celebrating a bilateral year of cultural exchange. A major programme of cultural events and activities in India have been organised by the British Council, and a similar programme in the UK organised by the Government of India.

A delegation of business leaders taking part in the Mayor’s International Business Programme will also meet up with Sadiq in Mumbai before they move onto Hyderabad and Bangalore.

Bilateral trade between the UK and Pakistan is valued at £2bn, and in 2015 five Pakistani companies were listed on the London Stock Exchange with a combined market value of £10.5bn. As a sign of an improving economy, in May Morgan Stanley Capital International (MSCI) reclassified Pakistan as an emerging market from frontier market status, driving a bullish trend in the Pakistan Stock Exchange. With a national population of 207 million and a fast-growing middle class, more than 100 British businesses are doing business in Pakistan to make the most of the massive opportunities

Only two cities in the world provide more investment in Pakistan than the capital and major London businesses operating in the country include Ernst & Young and Standard Chartered.

Key events attended by Sadiq are expected to involve figures from the Pakistani cultural, sporting and financial sectors. The Mayor will also be accompanied by a group of senior business executives from the capital who are looking for trade deals or investment opportunities there. To mark the 70th Independence Anniversary of Pakistan, the Pakistan High Commission in London have commissioned ‘Emerging Pakistan’, a year-long campaign that showcases Pakistani culture, its landscape and people.