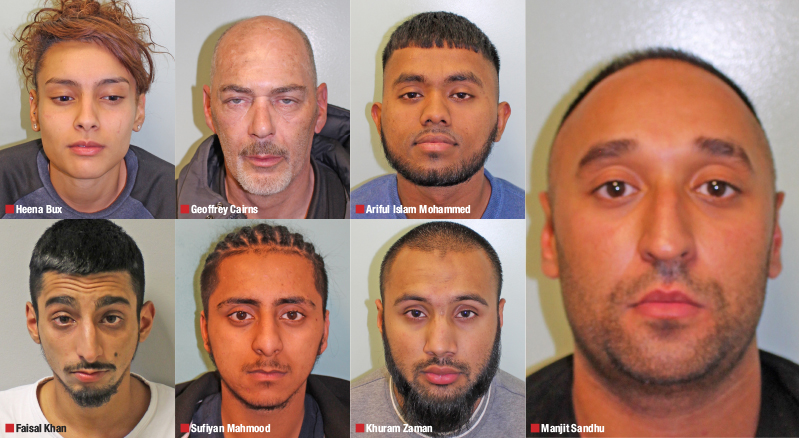 A prolific gang of car thieves have been convicted following a raid at a pub run by the ringleader’s dad. They made off with almost £3million’s worth of cars in more than 120 offences between March 2015 and August last year.

The brazen gang broke into residential homes in London, at night to steal car keys, which were then used to steal the victims’ high-value cars from outside their houses.

The criminals also used sophisticated key-programming technology to steal other vehicles – a technique often referred to as ‘keyless car theft’.

32-year-old ring leader, Manjit Sandhu of Fairlawns Close, Hornchurch, was found guilty of conspiracy to commit burglary and conspiracy to steal at Southwark Crown Court after he was caught on his own CCTV system leaving home to commit the crimes.

The vehicles stolen were usually prestige models such as Range Rovers, BMWs and Mercedes. The criminals used vehicles that looked like minicabs, complete with Transport for London (TfL) ‘private hire’ stickers, to commit the crimes.

Some of the vehicles were broken for parts, whilst others were exported intact to Africa.

A major operation codenamed Brasshand – was led by the Met’s Organised Vehicle Crime Unit who say the true figure of their crimes is most ‘likely to be much higher’ than £3million estimated.

The operation culminated with the execution of a series of search warrants, including a raid on a pub in Manor Park, E12, run by Sandhu’s dad. In the basement of the pub officers found bags containing stolen car keys, a key-programming device, ‘blank’ keys and a tool for picking vehicle locks.

Sandhu was not present at the time of the search and went into hiding, but was soon located and arrested. A number of his co-defendants were arrested in raids at their home addresses and other evidence was recovered, including further keys for stolen cars.

In one instance, some of the offenders stole a BMW after breaking in to a house to get the key, but were unaware that the stolen car was fitted with a ‘dash cam’ that captured images of them as they got in and out of the car.

Sandhu’s offending was so brazen that he even committed an offence on the very same day that he received a suspended sentence for involvement in the theft of another vehicle.

Appearing alongside Sandhu, co-conspirator Mohammed Islam, 21, of Knox Road, Forest Gate, was found guilty of conspiracy to commit burglary and conspiracy to steal as was 55-year-old Geoffrey Cairns of Swindon Lane, Romford.

Heena Bux, 21, of Walwood Road, Leytonstone, was found guilty of conspiracy to commit burglary and conspiracy to steal at Southwark Crown Court as was Khuram Zaman, 20, of Violet Road, Walthamstow.

“They brought distress to many victims whose homes they broke into, who not only lost their vehicles but in many cases were traumatised by the thought of someone having been in their house while they slept.

“Although the case involved over 120 offences, it is clear that this team were responsible for an even greater number of crimes.

“Almost all of the houses that were burgled had uPVC front doors that had not been double locked, allowing the offenders to gain entry very quickly using simple tools.”

“I would urge all householders to ensure that their front door is correctly locked at night – this means not only lifting the handle on a uPVC door, but also using the key to lock it. Unless it is locked with the key, the door remains vulnerable to the method employed by the criminals in this case.”

All eight are due to be sentenced at Southwark Crown Court on 11th and 12th April.