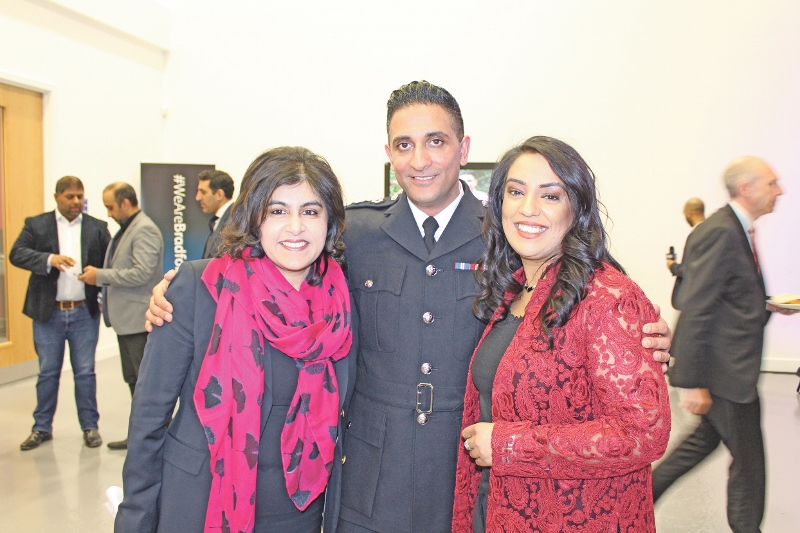 Naz Shah MP hosted the first of a series of special celebration events highlighting the achievements and contributions of the Black and Minority Ethnic community in public life.

Key speakers included Baroness Sayeeda Warsi and Chief Constable of West Yorkshire Dee Collins, who both spoke passionately about the necessity of a police service that accurately reflected the society it served. They emphasised the importance of role models like Chief Superintendent Mabs Hussain in achieving that end goal.

Thanking Naz Shah and his commander colleagues, Chief Superintendent Mabs Hussain said: “I have been thinking about the purpose of this event, what is it really about?

“I personally don’t think this is about me. It has to be about something more, an opportunity for those of us who are in positions of trust, with a responsibility to others, to make a difference within our professions.

It was highlighted during the evening that the challenge for policing is significant and yet in the last 20 years little progress has been made.

Mabs said that when he joined West Yorkshire Police, it had 5 per cent BME representation and today that figure stands at just 5.6 per cent.

Nationally, since March 2012 there has been an increase of 109 BME Officers.

To meet the Peelian Principle of Policing, a staggering 10,340 BME officers are required for the police service.

“Reflecting on how I got here – I have had some fantastic support inside and outside the organisation and I have had to overcome a number of challenges, some perceived and some real,” says Mabs.

“Success for us as a society is when there is no requirement to celebrate people like myself. I become the norm rather than the exception.”

Dee Collins told the audience that West Yorkshire Police the she recognised that in order to better understand the diverse population, the workforce should be drawn from all communities to ensure that the service focussed on protecting the vulnerable and to keep communities’ safe and feeling safer.

She acknowledged that despite an increase in the proportion of Police Officers from a BME background over a number of years (up from 4.6 per cent in 2010 to 5.2 per cent in April 2016) there is still much to do.

WORLD CURRY FEST: Gastro Diplomacy from the UK to Malaysia