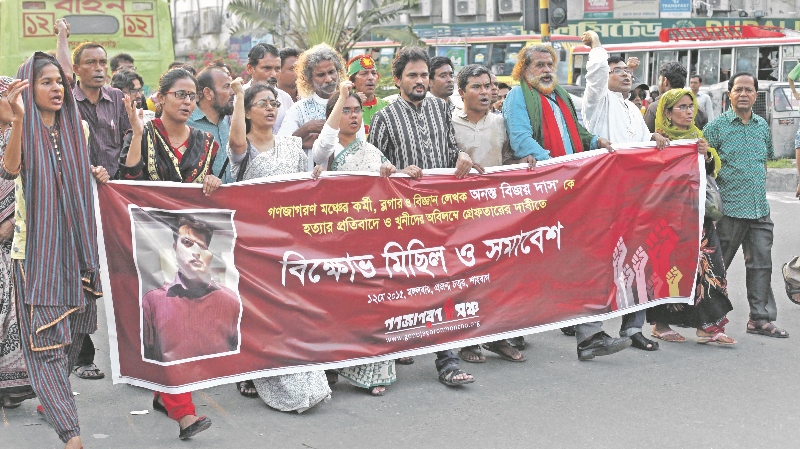 A blogger has been hacked to death by a masked gang in Bangladesh – the third such murder of a critic of religious extremism in three months.

Ananta Bijoy Das, 33, wrote for the Mukto-Mona (Free Mind) website which describes itself as a space for “freethinkers, sceptics, atheists and humanists”.

His attackers were wearing masks and carrying machettes hacked Das in Sylhet city.
The front page of the website now displays the message “We are united in grief and remain undefeated” written in white on a black background.

Bangladeshi news site BDNews24 says that Das was also part of a secular movement called Ganajagaran Mancha, which called for both protests and more actions by the government in the wake of his death.
A friend of Mr Das claims he had received death threats and was on a hitlist of atheist bloggers drawn up by Islamist militants. His death marks an escalation in religious violence in the country.
Mukto-Mona used to be moderated by Avijit Roy, 43, a Bangladeshi-born US citizen living in Atlanta, who was hacked to death in the capital Dhaka in February.

Mr Roy was a prominent voice against religious intolerance, and his family and friends said he had been threatened for his writings.

The software engineer espoused atheism in a January posting on Facebook, calling it “a rational concept to oppose any unscientific and irrational belief”.

Militant groups Al Qaeda in the Indian Subcontinent and Ansar Bangla claimed responsibility for the attack and Islamist Farabi Shafiur Rahman has been arrested on suspicion of his murder.

Mr Roy’s wife Rafida Ahmed was seriously injured in the attack and has since returned to the US.
A month later atheist blogger Washiqur Rahman was also hacked to death in Dhaka. Police have arrested two students said to be from a madrassa.

Although Bangladesh is officially a secular country more than 90 per cent of its 160 million population identify themselves as Muslims.