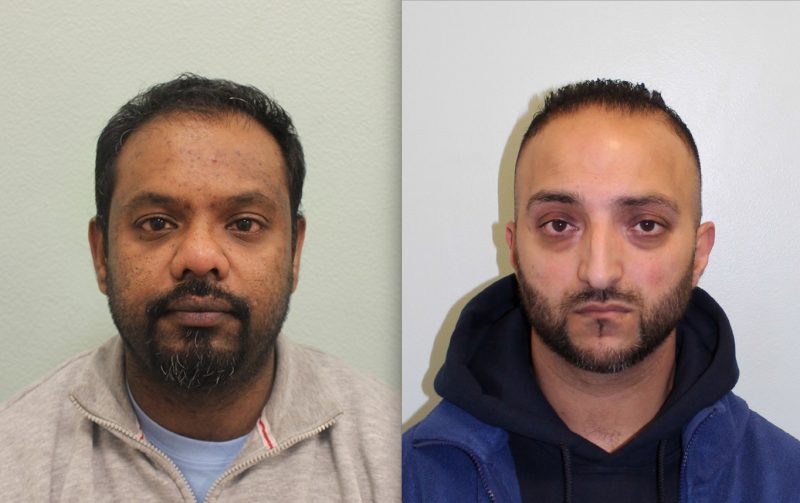 A criminal network that used corrupt baggage handlers to smuggle at least £16 million worth of drugs through London’s Heathrow Airport have been sentenced to a total of over 139 years in prison.

The conspiracy was brought to an end in December 2016 following an 18-month investigation led by the National Crime Agency, with support from Border Force and Heathrow Airport, during which over 100 kilos of cocaine and 44 kilos of cannabis was seized.

Surveillance officers watched as British Airways baggage handler Joysen Jhurry, 41, assisted by his colleague Mohammad Ali, 41, arranged to move suitcases containing the drugs off the plane and have them placed on baggage carousels for domestic arrivals.

Around the time of each flight, Jhurry was in phone contact with his right-hand man Preetam Mungrah, 44, who acted as the intermediary between him and the organisers.

The bags would then be collected by couriers arriving on internal fights from other airports in the UK, who could exit Heathrow domestic arrivals without going through customs controls.

Moses Awopetu, 38, Felicia Kufuor, 66, and Francisca Archer, 26, received a text containing a photo of the suitcase they were due to pick up. Each was arrested on separate occasions by either Border Force or NCA officers as they attempted to leave the airport concourse.

In charge of the drug importations and onward distribution was Damion Goodhall, 30, Wilfred Owusu, 31, Mark Agoro, 52, and Michael Sutherland, 48, who organised for cocaine to be flown in from Brazil on at least six separate occasions.

They were heavily supported by Aziz Abdul, 37, a long-time friend of Owusu.

Sutherland’s assistant, Leiona Townsend-Bartley, 32, helped out with logistics by liaising with couriers and booking flights or hotels.

Amongst the evidence used to convict the group in 2017 was a series of call logs highlighting the constant contact between numbers in Brazil and the organisers, as well as between them, Jhurry and Mungrah.

Members of the group were also filmed by NCA officers meeting on numerous occasions, either at each other’s houses or in public places, to discuss their criminal business.

Eight members of the network were arrested in dawn raids across London on 14 December 2016.

Jhurry, Goodhall, Agoro, Abdul and Awopetu pleaded guilty, but the rest of the group were convicted for their roles in the conspiracy in two separate trials at Kingston and Southwark Crown Courts.

All 11 were sentenced at Southwark Crown Court. Owusu and Sutherland both received 20 years for their organisational roles, whilst Agoro was sentenced to 14 and a half years and Goodhall to 11 and a half.

NCA regional head of investigations Brendan Foreman said: “This was a sophisticated plot and at the centre of it was a man who used his privileged access to Heathrow and insider knowledge of the airport’s systems for criminal purposes.

“This kind of corruption threatens the security of the UK border and the public at large which is why the NCA and its partners are tackling it as a priority.

“Border Force, Airport authorities and the airline community were vital in helping us to stop this organised crime group in its tracks and pull together the evidence which lead to them being sentenced to significant jail time today.”

“They used their in-depth knowledge of the infrastructure at Heathrow to provide invaluable insight to colleagues at the National Crime Agency and the final operation to arrest suspects was very much a joint effort.

“This is just one example of how Border Force officers keep restricted and prohibited items out of the country and prevent them getting into the hands of organised crime groups.”

Details of those convicted

Details of those who had previously entered guilty pleas