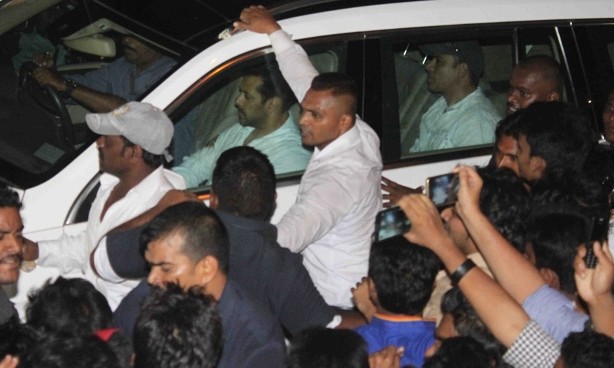 Bollywood superstar Salman Khan’s five-year prison sentence for killing a homeless man with his SUV after a night out drinking 13 years ago has been suspended pending an appeal.

The actor was on Wednesday 6th May found guilty at a sessions court of culpable homicide and other charges for driving his vehicle into a group of homeless men sleeping rough in suburban Mumbai in 2002.

He was convicted of all charges, including driving while under the influence of alcohol and without a licence, and was sentenced to five years in prison but released on bail for two days.

On Friday, lawyers for 49-year-old Khan argued at the city’s High Court that their client’s conviction should be overturned.

Judge Abhay Thipsay ruled the sentence would be suspended until an appeal was heard, expected to be in July, and set new bail terms for the film icon.

“The defence has raised pertinent points about the evidence presented by the prosecution which need consideration,” the judge said.

“Also, the points based on which the culpable homicide conviction was passed needs examination,” he added.

“It is not a case where the applicant is likely to abscond and both parties have no objection to hearing an appeal in a fast manner so the sentence is suspended until an appeal is disposed.”

The judge told a packed courtroom that the multi-millionaire, who was not present at Friday’s hearing, must post bail of 30,000 rupees (£303).

Khan’s lawyer Amit Desai said: “The prosecution has not established beyond doubt that it was my client who was driving that night.”

During the proceedings, Khan’s defence team had argued the actor’s driver was to blame for the September 2002 hit-and-run, which killed one man and injured several others after mounting the pavement in the suburb of Bandra West.

They claimed the actor had been drinking water and had climbed out of the car through the driver’s side after the accident as the passenger side door had been damaged.

But Judge D.W. Deshpande on Wednesday rejected the claim after survivors of the crash testified that Khan was driving the vehicle when it ploughed at speed into the men sleeping on the street near a bakery.

One of the sleeping labourers injured in the accident said in his statement that “Salman was so drunk he fell”.

The body-building actor is no stranger to controversy and spent more than a week behind bars for killing an endangered Indian gazelle in 1998.

He has starred in more than 100 films and television shows since his first hit “Maine Pyar Kiya” (I Fell in Love) in the 1980s.

Khan had become the second big-name Bollywood actor to be sentenced to jail in the last two years. Sanjay Dutt, the star of a series of gangster movies, is behind bars over possession of weapons linked to several bombings in Mumbai in 1993.
The High Court is to reconvene again on 15th June to set a date for the appeal hearing.