Bollywood dancers and the sound of African drums greeted residents at an extra care housing development in Bradford earlier this week, as a celebration was held to mark the official reopening of the site.

Young-at-heart residents from Dove Court, managed by Hanover Housing Association, were joined by enthusiastic staff members as they limbered up at a joint Christmas Carnival-come-welcome home party.

In June of this year, an electrical blaze broke out at the Undercliffe development, forcing residents out of their accommodation for months whilst renovation works were carried out.

Although the building’s robust fire safety procedures and design stopped the fire from spreading, it suffered significant flood and water damage from the fire services’ attempts to put out the blaze.

After months of detailed renovation work, which included the redecoration of all communal areas and replacing lounge furniture, residents then moved back to the estate.

Amongst the residents at the celebration event was Mr Isharwal Lal Mistry, who moved back in to to the estate during the second week of October.

Suffering from severe visual impairment, Mr Mistry was staying at Shakespeare Court whilst he waited for the refurbishment work to be completed and said it was ‘great to be home’.

Extra care housing manager, Jaz Samplay, added: “Despite his visual impairment, Mr Mistry is very independent and so it was important to get him back into Dove Court as soon as possible and back into his routine.

“He has been here since August 2007 and this is the home that he knows.”

Tom Brown, director of extra care and services, described the day of the blaze and how it was imperative to ensure residents, such as Mr Mistry, returned to the development at the earliest time possible.

“The day of the fire, I was in London and it was a couple of minutes after 9am that I got a phone call saying Dove Court is on fire,” Mr Brown said.

“I didn’t know to what extent this was at first but it soon became clear that it was serious as I started receiving more phone calls.

“Our immediate response was to help re-home residents whilst renovation work is done and with the help of Bradford’s social housing team, everybody was catered for in the best way possible.

“It was hard for residents and staff but we made sure we got all the work completed in record time and achieved our goal of bringing residents back home before Christmas.”

One group of entertainers who were on hand to help make the celebration have a truly ‘Bollywood-feel’ was the Punjabi Roots Academy.

Navraj Gill, acting manager of the group, said the dancers could not have wished for a better audience and felt privileged to have been invited to help celebrate the important occasion.

“Although we do a lot of work in the community, this is the first time I have been to one of these extra care housing estates,” he said.

“I have to say, we could not have got a better crowd. Residents were joining in with the dances and everything went really, really well.” 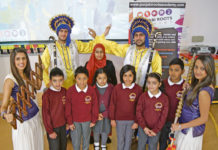