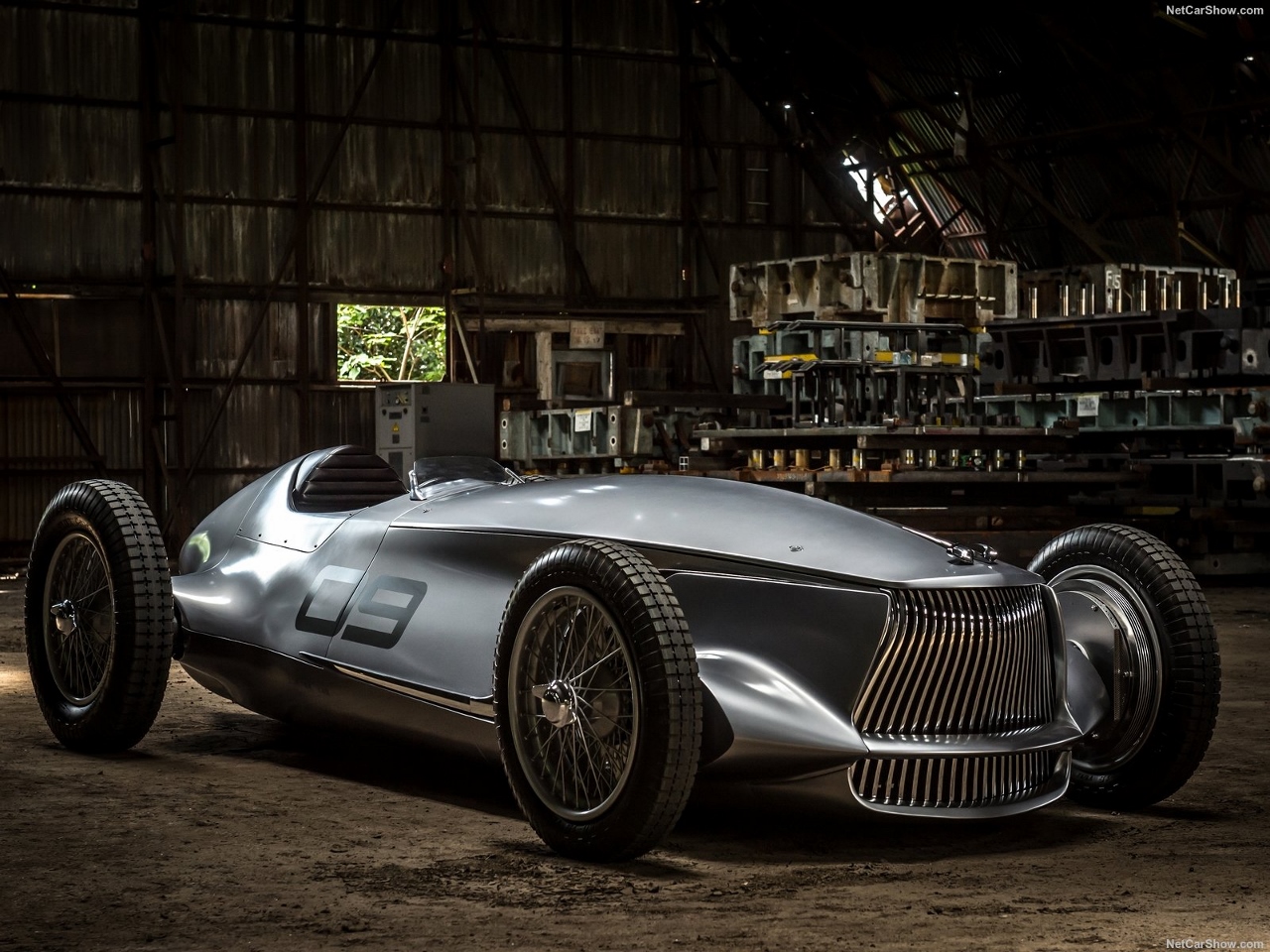 The car, called Prototype 9, is a celebration of Nissan Motor and Infiniti’s ingenuity, artistry and craftsmanship. It represents a reimagining of a 1940s race car with time-honored production techniques employed to realize its retro design.

It started as a discussion: What if Infiniti had created a race car in the 1940s? If one were to imagine an open-wheeled Infiniti racer on the famous circuits of the era, such as Japan’s Tamagawa Speedway, what would that look like?

The sketches were stunning and the idea so compelling that they had to produce a prototype. As other departments became aware of this, they volunteered their time to create a working vehicle.

The car is powered by a prototype electric motor and battery from Nissan’s Advanced Powertrain Department. This nod to the future contrasts with the traditional materials and techniques applied for the Prototype 9’s manufacture, including panels hand-beaten by a team of Takumi – Nissan Motor Corporation’s master craftspeople.

Prototype 9 was inspired by an emerging era of Japanese motorsport. The custom-built Prince R380, which also makes its public debut at the 2017 Concours d’Elegance, broke several land speed records in 1965 before taking overall victory at the 1966 Japanese Grand Prix at Fuji Speedway.

Prince Motor Company is considered to be Japan’s original builder of premium automobiles, and its legacy can be traced to Infiniti Motor Company and its current model line. The R380 in Pebble Beach is the actual Japanese Grand Prix-winning car, believed to be the only surviving R380.

Albaisa created a sketch, a starting point for bringing Prototype 9 to life, with sleek lines, and aeronautically-inspired bodywork crafted in bare sheet metal.

Initially shared only with close colleagues, the idea soon spread among Infiniti’s design team members – with a number enthusiastically calling for the vehicle to be brought to life.

The sketch triggered a domino effect – each person who saw it felt it deserved more attention, and soon there was a burgeoning desire within Infiniti to take it beyond the drawing board.

More designers at the Infiniti Design Studio in Atsugi, Japan, began making their own detail contributions – the shape, design and materials that could feature in the cockpit, for example. Chasing a passion for beautiful vehicle design, the team moved to bring the sketch into the physical world.

The vehicle was transformed from a daring idea into scale design studies in clay. Full-size models were soon formed.

Finished in a bare sheet-metal skin, Prototype 9 is the result of countless hours of careful construction.

The vehicle’s stunning bodywork is made from steel body panels wrapped around a steel ladder frame. The panels were hammered into shape by the Takumi.

In every other respect, the car is unashamedly inspired by retro aeronautical designs. Prototype 9 is defined by its smooth, aerodynamic surfaces, long bonnet and short overhangs, an exposed cockpit, and open-wheeled layout. 19-inch centre-locking wire-spoke wheels at each corner are even wrapped in period cross-ply competition tyres.

The intimate and focused cockpit is the result of two Japanese approaches to craftsmanship – ‘mitate’ (pronounced “mee-ta-teh”) and ‘shitate’ (“shee-ta-teh”). ‘Mitate’ relates to the practice of curating and bringing together the best possible selection of materials. ‘Shitate’ is the desire to tailor the chosen combination of materials, bringing out their best characteristics.

In a cabin that features no distractions from the road ahead, the steering wheel rotates around a fixed central hub, housing the driver’s instrument gauges. The hub itself finished in turned aluminium, an effect found on aircraft throughout the first half of the 20th century.

The car has been equipped with a next-generation EV powertrain. The Prototype 9 is the first Infiniti to be powered by a new EV powertrain – a 30 kWh high-voltage battery paired with a prototype electric motor, one not yet seen on a production vehicle.