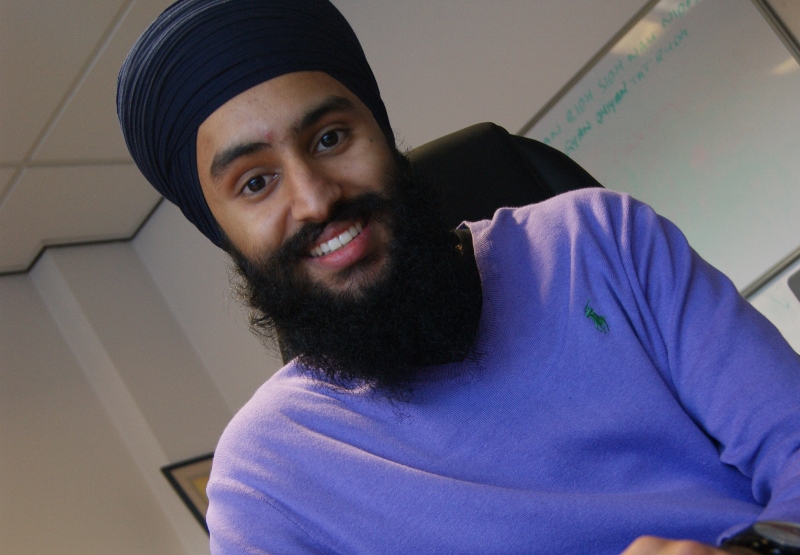 A recently qualified pilot from Bradford, who at the age of just 20 has landed his first commercial airlines job, says more young people should look to the skies for their career choice.

Ever since he was just a little boy, Rajandeep Singh has always dreamt of flying.

Like so many youngsters throughout the country, the fascinating world of aviation drew him in, with the prospect of navigating a 75-tonne airborne vehicle one too tempting to ignore.

It was, however, through a chance encounter at his local Gurdwara that he first got the chance to ‘get up close’ with some classic planes.

“I’ve always been interested in flying, it’s just something that has grown on me,” he said.

“From the Gurdwara, we had links to the RAF and we used to watch the Red Arrows flying and sit in Spitfires.

“During my GCSEs when I was 15, I took my first trial flight at Leeds Bradford Airport and that’s when I diverted to the commercial side.”

Whilst still studying in school, Rajandeep would spend his spare time at Leeds Bradford Airport, notching up 40 hours of air time with a company called Multiflight.

Falling in love with the potential of flying a commercial plane, he says he became determined to a career path which soared higher than most.

“I took a few more lessons at Leeds Bradford and it was there that I decided that I wanted to carry on with it and do the full course,” he said.

“I flew with Multiflight, whilst I was doing my studying in Bradford, and continued to do so throughout my A-Levels before I was accepted onto a course at Oxford Aviation.”

Between April 2015 and August of this year, the Idle-born pilot attended the Oxford Aviation Academy, at Kidlington Airport.

With a reputation as one of the top flying schools in the world, Rajandeep passed with ‘flying’ colours and instantly began applying for jobs once he had his pilot’s license secured in September.

Less than four months later, and he has already landed his first job as a pilot-in-training with a leading airline.

He said: “I got the letter through on Thursday (15th December) saying I had been accepted.

“I had to go through an application process, screening, group tests and a flying assessment which took two months but now I am officially on my way.”

With the youngest pilot in the UK flying at the age of 19, Rajandeep can consider himself amongst the nation’s newest breed of airline experts.

However, despite his young age, he says that more teens should be turning their attention to a career in the cockpit.

“Flying is a skill that someone people do find difficult, because of all the co-ordinations and the extra tasks like managing the paperwork in the flight, keeping up with the times, fuel,” he said.

“I’d say that for me, the harder part is managing everything, rather than co-ordinating. My friend has got a job as a pilot, but he can’t drive yet.”

He added: “It’s a job filled with challenges and travelling but one that is so rewarding that I would urge anyone to have a go at it.”