“Why are people more worried about the piece of fabric on my head than what is inside it?” asked Member of Youth Parliament (MYP) for Yorkshire and Humber, Muzdalfa Ahmed, to a packed audience perched on the green benches of the chamber at the House of Commons.

On 11th November, Speaker Rt Hon. John Bercow MP, presided over the annual sitting for the seventh time, as he watched 250 politicians of the future debate topics that covered education; racism and religious discrimination; public transport; votes at 16 and the health service, following a nationwide ballot of almost a million young people.

When it was Muzdalfa’s turn to speak, she felt ready. This was her second time at the Houses of Parliament – but her first time addressing the room.

Her speech posed the question: “What does my race have to do with my ability to succeed in my life? We are living in the 21st century, yet people like me still have to feel that nasty stuff – we still have to feel Islamophobia or anti-Semitism. I am not speaking for myself, but for the thousands of young people who elected me as their MYP.”

Muzdalfa is used to speaking up for other people. From the age of 11, she felt there were things that she wanted teachers to do at her school and ‘they weren’t doing it’.

Whilst juggling her studies with a part-time job as a teacher at the Lingfield Centre, Muzdalfa also finds the time to be an influential mover and shaker in the political sphere.

A self-effacing and demure young woman, the political teen transforms into a powerful presence when given a platform.

Last month, she impressed Labour MP Richard Burgon when she joined him on a panel at Leeds Grand Mosque as part of Islamophobia Awareness Month. Her talk touched upon ‘fostering the idea of inclusiveness’.

Describing her as ‘inspirational’, Richard mentioned that she possessed ‘courage and insight’ beyond her years.

However, Muzdalfa’s success hasn’t been won without hardship.

“I have found that my religion can sometimes stop me from succeeding because when you fill in your CV, your name is obviously different,” she said.

“When I was in the Scottish Youth Parliament, I didn’t think I would even get in at first, because some people said that I wasn’t going to do it because of the way I dress or where I’m from. It only strengthened me further because I wanted to prove them wrong.”

Nearly 17,000 took part in the ‘Make Your Mark’ consultation in Leeds and tackling racism and religious discrimination was the top issue from there.

“It’s something my constituency feels strongly about,” she continued. “I’ve come across it a lot on social media. My friends and family have had trouble. People did tell me some pretty bad stories after it was highlighted in the ‘Make your Mark’ ballot.

“I heard people talking about segregation and how people don’t communicate. I thought about that and then I decided that we need to take that ladder and turn it into a bridge.”

As an MYP, Muzdalfa has to be politically neutral as she gets support from every party.

When pushed, she did state Nicola Sturgeon as an ‘inspiration’.

“She gives a lot of help to young people. Now young people in Scotland are allowed to vote when they’re 16-years-old. She’s an MP that is very approachable and she listens to us.”

Muzdalfa’s future career may not go down the path of politics – she wants to keep her options open.

“I get plenty of support from my dad. I look up to him because, for him, studies never finish.  He’s probably going to do a post-doc now he’s completed his PHD. Perhaps I’ll do the same. Only time will tell.”

If you’re aged between 11 and 18 (inclusive) you can find out how to become an MYP here: www.ukyouthparliament.org.uk/about-us/becoming-a-member/ 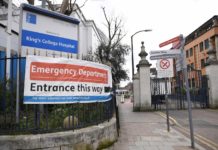 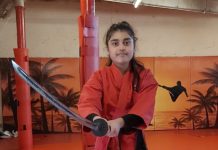