Opposition parties have warned that moves to make all public office holders swear an oath of allegiance to British values will not combat radicalisation.

Communities Secretary Sajid Javid sparked controversy by writing in the Sunday times that people could not play a ‘positive role’ in public life unless they accepted basic values.

These included democracy, equality and freedom of speech, he said.

Mr Javid’s proposal to counter extremism came in response to a report on social cohesion by Dame Louise Casey, which warned some sections of society did not accept British values such as tolerance.

He said he was ‘drawn’ to Dame Louise’s recommendation to bring in an oath of allegiance because it was impossible for people to play a “positive role” in public life unless they accepted basic values like democracy and equality.

She said: “I have nothing against it in principle, but it will not make a difference to the problems of radicalisation, or integration.

“I don’t think the oath will make any verifiable difference.”

“Forcing public servants to swear an oath to British values would be both superficial and divisive.

“We should be talking about the universal values that unite us, not using nationalistic terms that exclude people.

“The Government must focus on integrating those small pockets of people living in segregated communities.

“Instead they are creating hostility towards all minority communities, the vast majority of whom want to be an integrated part of the United Kingdom.”

But ex-chancellor George Osborne hailed the proposed move as a “great initiative” which would help cohesion.

Mr Javid said: “If we are going to challenge such attitudes, civic and political leaders have to lead by example.

“We can’t expect new arrivals to embrace British values if those of us who are already here don’t do so ourselves, and such an oath would go a long way to making that happen.

“Let me be very clear that I’m talking about integration, not assimilation. I don’t want to see a government-approved, one-size-fits-all identity imposed on everyone in this country. So when I talk about integrating into British life or embracing British values, I’m not demanding that everyone drinks tea, watches cricket or bobs up and down at the Last Night Of The Proms.

“I’m talking about tolerating the views of others, even if you disagree with them. About believing in freedom of speech, freedom of religion, freedom from abuse. I’m talking about a belief in equality, democracy and the democratic process. And about respect for the law, even if you think the law is an ass. Because if you Do disagree, you can change it. That’s what freedom and democracy is all about.

“Such values are not unique to this country. But if you don’t accept that they’re the building blocks of our society, you’ll struggle to play a positive role in British life.”

Dame Louise also called for all migrants to swear an oath of allegiance, not just those seeking UK citizenship.

Her report warned the country was becoming more divided as it became more diverse and highlighted that in some communities women were the subject of “abuse and unequal treatment of women enacted in the name of cultural or religious values”.

Dame Louise acknowledged that elements would be ‘hard to read’, particularly for Muslim communities which already felt under pressure, but she said the country had to face up to ‘uncomfortable’ problems.
The review recommended that schoolchildren should be taught ‘British values’ of tolerance, democracy and respect to help bind communities together amid growing ‘ethnic segregation’. 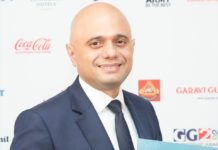 Places of worship to get £multi-million funding boost to guard against...