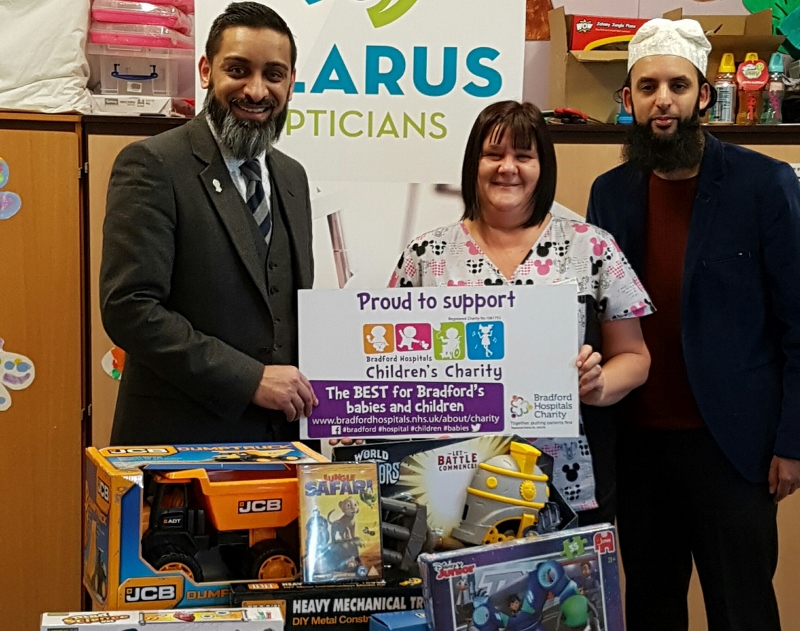 Children at Bradford Royal Infirmary could have been forgiven if they thought Santa was in disguise this year after local optician, Sajid Bashir, dropped by with some special surprises for young patients.

Although he was not wearing the classic red suit and hat combo, the generous gift-giver pulled up outside the hospital with a sleigh-load of gifts for kids of all ages.

From cuddly toys to board games and even a miniature JCB digger, the toys were handed over to play specialist, Alison Kay, on the children’s ward on Wednesday 21st December.

Explaining why he wanted to carry out the project this year, Sajid said it was an important time for so many communities.

He said: “It is the Islamic holy month of Rabi-Ul-Awwal, which marks the birth of Prophet Muhammad (Peace Be Upon Him) and is a joyous occasion for Muslims in the UK and worldwide.

“It also coincides with the Christmas period which is also a joyous occasion for many. It’s basically a period of double celebration.

“I wanted to think of the less fortunate in a time we will spend time with our families but for poorly children in hospitals it can be a lonely period.

“After speaking to my friend Nazim Ali, we decided to undertake this heartfelt gesture to put a smile on the children’s faces.”

Sajid was joined by Nazim on the day as well as his two-year-old daughter, Shifa Fatima.

As a child, Nazim suffered from tuberculosis and was treated at the BRI himself.

He added that he takes part in a yearly toy donation to the hospital, after seeing firsthand how lonely it can be away from your family at a time of celebration.

He said: “Over the last four years, I have distributed Eid Gifts to poorly children at BRI’s Childrens Ward 17 having spent time there as a child.

“I commend Sajid for thinking of these innocent children and making their festive season that much more enjoyable. The essence of Islam is to give back and benefit wider society.”