An emotional mum from Wakefield says she is ‘afraid to leave her home’ after heartless thieves stole charity fundraising money for her disabled daughter’s care, in a burglary last month.

On 21st November, Shabnam Nazim returned to her address, on Pinders Heath, to find her patio door smashed through and the house in complete disarray.

“They completely trashed the house,” she told the Asian Express.

“My daughter Amelia’s sensory bubble tube was broken, as was her bath-seat and other essential care equipment.”

Six-year-old Amelia has cerebral palsy and an incurable intestinal condition which means that her mother looks after her around the clock.

“The intruders stole a lifeline from Amelia when they raided her fundraising money for Martin House Hospice,” Shabnam added.

Shabnam had left the house about 2pm in the afternoon to take her daughter to the hospice.

Upon her return, the house had been ransacked, with jewellery worth tens of thousands of pounds stolen, as well as £5,000 in cash for Amelia’s care.

Describing the incident, she said: “My sister resides with me at the moment to support me with Amelia. She went to do a school run as well that day. Her little girls go to the mosque and she went to drop them off at 5pm.

“At 6.45pm she left to collect the girls and when she got back at 7.15pm, she pulled up at the drive and saw two men stood in the doorway.

“The lights were on and a blue BMW was parked outside our house so she called the police straight away.”

Shabnam says it was then that the car began beeping its horn to warn the intruders and her sister ‘clicked’ that the car was connected to the crime.

“The car sped off before my sister could take a picture of the registration plate,” Shabnam continued. “The intruders escaped from the patio door at the back where they’d broken a window panel.

“There was glass everywhere in the dining room. They ran through the neighbours’ garden and ran around the cul-de-sac and got picked up.

“They raided my safe which contained a lot of fundraising money for Amelia and a substantial amount of jewellery and dowry that I got for my wedding. They’re sentimental things that are priceless to me.

“They also took jewellery I got as a child and a necklace that Amelia’s granddad bought her when she was born, and he has now passed away.

“They trashed my wardrobe and my bed is broken. Amelia’s bath seat was in pieces. They knocked the bookshelf over and took my documents and broke the desk. I’m completely devastated. I can’t believe what’s happened.”

Detectives in Wakefield have described the suspects as three men dressed in dark clothing, with one driving a royal blue BMW.

Detective Constable Chris O’Brien, of Wakefield CID, said: “This was a frightening ordeal for the home owner to return home and find two people in her house who then fled with a number of sentimental items.

“The money stolen from the safe was raised to go towards her daughter’s ongoing medical care – this is deeply upsetting for the family.

“I would like to appeal to anyone who was in the area, saw anyone matching the above descriptions or the blue BMW to come forward and contact myself via 101 quoting crime reference 13160699005.”

Shabnam is determined to raise more money so that Amelia’s therapy can continue. For more information on Shabnam’s fundraising appeal, please visit www.justgiving.com/fundraising/amelia-nazir 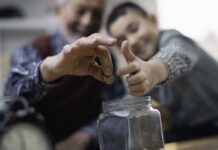 Quids In: Everything you need to know about the new pound...