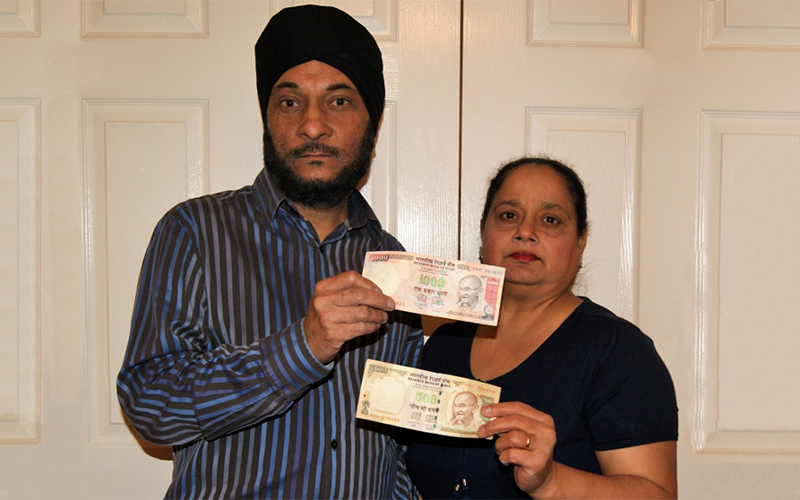 Many Non Resident Indians (NRIs) in Britain have lauded Indian Prime Minister Narendra Modi’s landmark initiative to abolish high-denomination banknotes in one of the nation’s biggest crackdowns in history.

The total amount of black money deposited in foreign banks by Indians is unknown but reports claim it totals US$50 trillion.

However, NRIs are left facing the dilemma on what they should do with any 500 and 1,000 rupee notes that they have in their possession.

With no guidelines from the Indian Government as to how Indians living abroad should proceed in exchanging any currency they may have, many have slammed the rude and unhelpful attitudes at the State Bank of India and ICICI bank branches in Britain.

British branches of the Indian banks have simply said that they cannot accept the rupee notes.

Now Indian jewellers in England are taking on the rupee currency in exchange for gold at hiked prices, as they stand a better chance to move the money out of the country and deposit in India through their commercial bank accounts.

Says Mrs Harinder Lall from Leeds: “I support the initiative for the better economic good for India, but the manner in which this has happened is so wrong. With only four hours notice before the rupees were no longer legal tender, millions of people are left in a very vulnerable position.

“For us in the UK, we are stuck with this dead money. There should have been some guidance for us from the banks here about how we should deposit the rupees or exchange them

Harinder’s husband Rajpal adds: “Overall we are supporting this decision that Modi has made. One, it targets corruption. Two, it gets rid of black money.

“However, we do think the manner in which this has all happened is unfair because the Indian government hasn’t helped people outside of India, all non-resident Indians. They haven’t been helped or given any guidelines regarding how to exchange the notes.

“The Indian banks in Britain are not accepting them. The State Bank of India or the ICICI bank in the UK, in our honest opinion, have not been helpful at all. In fact they are rude and they just don’t want to know.

“We can do two things with the rupees we have. We can either throw them away which means collectively we all lose out. Or then we can hope that relative going to India within the next few weeks (and if they are willing) will take the notes and exchange them for us.

“We think the way the government has gone about it is ridiculous. They’ve helped the rich, but not the average person. There have been at least 25 people who have died and regardless of age, they haven’t helped them. It hasn’t been planned. There’s chaos in the banks and the huge queues at the cash machines.

“Our family in India are in a similar situation.

“We had been in India and our return flight was on Monday evening (7th November). When we landed we realised any money we had (500 and 1,000 rupee notes) was dead.
“Had we known a little bit more in advance, we could have left it with a family member and they could have deposited it for us.”